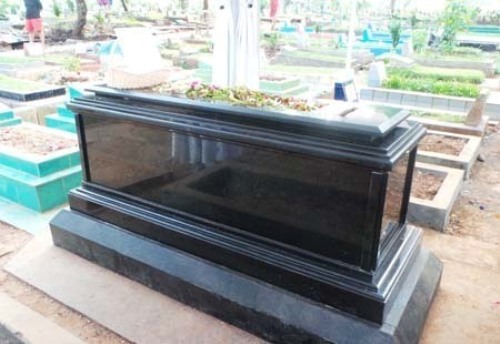 Visiting the Grave in Islam (Fin)

38. There are three kind of activities usually performed at the grave, or when someone visited the grave:

– The suggested activities, that is visiting the grave in order to remembering the Last Day, to greet the dead in their graves, and pray for them.

– The innovated activities, which diminishing the perfection of tawheed. It is one of the tool that might lead to shirk, for example visiting the grave in order to pray to Allah and worship Him near the grave, or to invoke blessing, giving rewards to the dead in their graves, build a construction over the grave, paint it, and put a lamp on it. Also including in innovations, when someone make the grave as a place to do worshipping acts, and he intentionally went on a long journey to visit it (the tour of visiting the grave). There are may other deeds that already confirmed as forbidden and which didn’t have any basis in shari’a.

– The shirk activities, that contradict the tawheed. for example like worshipping the dead, such as praying to it as one’s praying to Allah, asking for their help, encircling around it, slaughtering the animals, vowing for it, and so on.

39. The means used or practiced to achieve something ruled as the ruling of it’s aim and target. Everything that lead to shirk and innovation in Islam should be stopped or banned. Everything new (and baseless) in Islam is innovation, and every innovation is an astray (See: ” Mujmal Ushul Ahlissunnah wal Jama’ah” written by Dr. Nashir Al ‘Aql)

No. 38: As mentioned above, there are three activities of those who visited the grave:

First, the suggested activities. That is, visiting the grave in order to remember the last Day, pay greeting to the deceased, and pray for them (except for the non muslims, see chapter At Taubah/The Repentance: 113). The indication for this point is the saying of the Messenger of Allah -peace and prayer of Allah be upon him- :

“I have prohibited you to visit the grave in the past. Remember, now visit it, since that might soften your hearts, wet your eyes of tears, and remind you of the Last Day, but don’t utter wicked words.” (Narrated by Hakim, see “Shahihul Jaami’”, no. 4584)

The Messenger of Allah -peace and prayer of Allah be upon him- forbade people to visit the grave at the dawn of Islam because the companions had just freed from kufr, and he  feared that if he allowed them, they would return to shirk practices. When the traces of ignorance were lost, Islam got stronger in influences and the companions were firmer in their belief, he allowed them to visit it.

Imam Al Manawi commented the words of Allah’s messenger -peace and prayer of Allah be upon him- ” now visit it”, that it should be done without wiping the tomb, kissing it, prostrating upon it, or other similar activities, because those are, as As Subki said, innovations. Only the fools doing that.  (see: “Faidhul Qadir” on the explanation of hadith no. 6430).

The Messenger of Allah -peace and prayer of Allah be upon him- also stated,

“(In the past) I have prohibited you to visit the grave. Now do it, because there is a lesson for you in it.” (Narrated by Thabrani, see “Shahihul Jaami’” no. 6789)

As for indications of praying for the deceased in their graves (not praying TO them), is, for example, what contained in the greeting recited when someone visited the grave, where it is about greeting and praying for salvation for them from torments. Imam ash Shan’ani said, “The aim of visiting the grave is to pray for them, do good for them, remember the Last Day, and be ascetic towards worldly affairs. As for what innovated by people these days that infringe that real aim, such as praying to them, asking them for help, asking Allah by their right, also invoking Allah of fulfillment of their needs through them, these are truly among innovations and idiocy…”

Second, the innovated activities, which examples has already been mentioned. The indications are as follow:

From Jabir -may Allah be pleased with him- said:

“The Messenger of Allah -peace and prayer of Allah be upon him- forbade people to paint the grave, sit upon it, build it, raised it more than an inch, or write names upon it.” (Narrated by Muslim, Abu Daud, Nasa’i, at Tirmidhi, and he classed it valid, Halim, Baihaqi, and Ahmad. The first addition in the brackets was narrated by Abu Daud, whereas the second addition was narrated by Tirmidhi and Hakim, he classed it valid, and it was agreed by adz Dzahabi. See ” Ahkaamul Janaa’iz” by Sheikh al-Albani)

“Allah condemned the Jews because they make the graves of their prophets as mosques.” (Narrated by Bukhari, Muslim, and Abu Daud)

This saying points out that making the graves of the prophets and pious men as mosque is a major sin. An expert in jurisprudence, named Ibn Hajar Al Haitami said,

Abul Hayyaj al Asadi said, “Ali Ibn Abi Thalib once told me, ‘Will you be please that I send you (for something) as the Messenger of Allah -peace and prayer of Allah be upon him- sent me before, “That is, do not let any statue but you destroy it, and do not let any grave being raised but you level it. “” (Narrated by Muslim)

“”Verily among the worst of men are those who are still alive when the apocalypse arrives, and people who make graves as mosques.”(Narrated by Ibn Khuzaimah, Ibn Hibban, Ibn Abi Syaiba, Ahmad, Thabrani, Abu Ya’la, etc. It is a valid hadith through all it’s narrational chains. See: “Tahdziirussaajid (Warnings for Ones who Prostrate” by Sheikh al-Albani)

In “Tahdziirussaajid”, Sheikh Al Albani explained that there are three meanings of the sentence “makes the graves as mosques”, which are:

According to Sheikh Shalih al Fauzan, the sentence means praying (or worshipping) near it, although without building a mosque upon it, because every place which prayer is intended in it is similar to make it as mosque, as the Prophet -peace and prayer of Allah be upon him- said, “”the earth has been made for me as a mosque and purification equipment.” (Narrated by Bukhari), and if mosques are built upon it, then the matter is evidently worse. ” (see: “‘Aqidatuttauhid” by Dr. Shalih al Fauzan)

Building Mosque around the Graveyard is Unlawful

Scholars from madzhab of Shafi’i, Maliki, and Hanbali has agreed that building mosque around the graveyard is something unlawful (see the book “Tahdziirussaajid” by Sheikh al-Albani). Some scholars of madzhab Hanbali even stated that prayer done inside such mosque is invalid and it is compulsory to destroy that mosque. Ibn al Qayyim said -when he mentioned about the laws and wisdoms of the war of Tabuk, and after mentioning the story of Masjid Dhirar, which Allah had forbidden His messenger to pray inside it-, “It includes burning down evil places where Allah and His messenger being disobeyed. Mosque in which people pray and mention Allah’s name, but because it’s built harmed and shattered the believers and used as the place of the hypocrites (then it should be destroyed).

Hence, it is compulsory for the imam (the government) to extinguish every place which happens to be in the similar condition, whether by destroying, burning, or changing it’s shape and issuing objects which became the reason of it’s building. If the masjid Dhirar was treated that way, then the places of polytheism that cause it’s caretaker as partner beside Allah are more rightful and more compulsory to be wrecked down, such as the matter for evil places like the liqueur stalls, homes of alcoholic drinks seller, and homes of the those who enjoin people to wickedness.

That is why, Umar Ibn Khattab burnt down a whole village where alcoholic drinks were sold in. He also burnt the stall of Ruwaishid ats Tsaqafi, and he named him the little evil. He also burnt the palace (the palace door) of Sa’d because he secluded from his people. The Messenger of Allah -peace and prayer of Allah be upon him- also intended to burn the houses of those who leave the friday and congregational prayer [1], but was prevented because there were women and children who were not obliged to perform those prayers, as he told [2].

Likewise, a waqaf is considered invalid if it was not aimed to realize goodness and not for worship, as it is invalid to give away that mosque as waqaf property. Therefore, mosques built on graves must be destroyed, as the tombs made inside a mosque must be demolished, as stated by Imam Ahmad and other scholars. By that, we might see that in Islam, there is no union between mosque and grave, and if one mingle with other, it will spoil it, and thus it is not allowed to put both things together, based on reasons mentioned previously. Giving it away as waqaf property is not allowed and this invalid, and prayers done inside such mosque are invalid because the Messenger of Allah -peace and prayer of Allah be upon him- forbade and condemned people who makes grave as mosque or lit lamps on it [3]. This is Islam, by which Allah has sent His messengers and prophets, but unfortunately, it has became a strange thing among it’s own followers as one might see today.”

Third, the shirk one, that is by diverting even one kind of worship to the grave dwellers, such as praying to them, slaughtering for them, encircling around their graves, and so on.

No. 39: Therefore, Allah’s messenger -peace and prayer of Allah be upon him- had closed all doors that might lead people to committing shirk. He forbade them to treat the righteous men in overrated way. He forbade them to build construction upon the grave, to paint it, to pray near it, etc.

And Allah knows best, and peace and prayer of Allah be upon our prophet Muhammad and his family and companions.

[1]. Narrated by Bukhari and Muslim
[2]. But the saying that mentions such thing is weak according to Sheikh al Albani because there is a man named Abu Ma’shar Najih Al Madani among it’s narrators, and he had bad memory. Sheikh even classified it as a munkar hadith, as he explained in his work, “Takhrij Al Misykaat (1073).
[3]. But the saying that mentions such thing is a weak hadith, as explained by Sheikh al Albani in his work, “Adh Dha’iifah”, in hadith no. 225, although that practice is also forbidden based on general indications