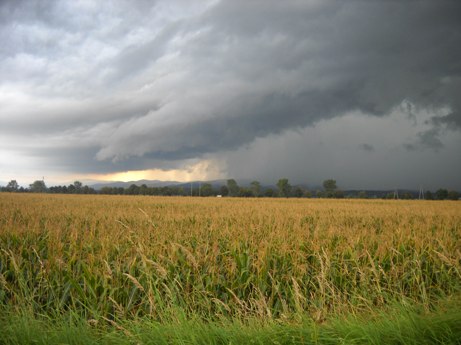 The Rain (Part 2)
In the first part of this article we have explained about the three functions of the rain. Now we’d like to continue with several other functions of it that Allah the Glorified and Exalted has granted us. Among it’s functions, is to be a real illustration about the how your sustenance was bestowed upon you.

The fourth function: The Real Illustration of How Your Provisions Sent down to you

Among the wisdoms that you might get from the rain cycle, as you’ve learned before, was that it served as a real illustration of how Allah granted His provisions to you gradually. Allah the Glorified and Exalted did it not because He was stingy, Glorified and Exalted be He, or because He was afraid of running out of the provision stocks, but it was meant fully to your advantage. If only Allah the Exalted granted His provisions to you all at one, just like how the waterfall pours, you would certainly be perished. As you would be, if Allah the Holy and Exalted poured down His rain as the waterfall. Therefore,  enjoy your life, because indeed, Allah the Holy and Exalted has prepared enough provisions for you.

Allah the Holy and Exalted hinted it through His decree,

“ If Allah were to grant ample sustenance to His servants they would go about transgressing in the land. But He sends down in due measure whatever (sustenance) He wills. Surely He is Well-Aware and All-Seeing concerning matters that relate to His servants. He it is Who sends down the rain after they despair of it, spreading out His Mercy. He is the Protector, the Immensely Praiseworthy.” (QS. As Syuura/The Council: 27-28)

See, O Brother, after Allah the Glorified and Exalted explained that He granted His provision gradually, He the Exalted mentioned the rain as an evidence and real illustration of how the provisions were sent down. Because Allah the Holy and Exalted, ever Knows, and See the condition of His slaves, He sent down the rain and other kinds of the provisions gradually, to prevent them from being harmed.

How would it be, to have Allah the Holy and Exalted pour the rain upon us just like the waterfall? or Allah gathered the one-month rain quantity, and pour it down in just a day?

The similar thing happened to your provision. You are so likely to be harmed if Allah the Glorified and Exalted grant it to you at inappropriate times. You must be troubled, if Allah the Glorified and Exalted granted your whole-life provisions just once during your lifetime. If it indeed happened, it would be very difficult for you to find places to keep your clothes, barnes to store your rice, and dam to retain your water part.

Realizing this, the Messenger of Allah left a message to his followers, saying,

“`Do not feel that your provision has been late, for no soul will die until it has received all its provision, even if it is slow in coming. So fear Allah and be moderate in seeking provision; take that which is permissible and leave that which is forbidden. ’’ (Narrated by Ibn Maja, Abdurrazzaq, Ibn Hibban, and Al Hakim; classed sahih by Al Albani).

The fifth function: Rain is the one of the Troop of Allah

Recently, some parts of our country was often dreaded with disaster and calamity. One of the causal was the rain. What happened in front of our eyes was a real evidence that the rain, which originally was blessing, might turn into the troop of Allah that would devastate those who rebelled against their God. Hence, the rain indeed as the double-edged blade; it might bring fortune, and misfortune.

““Thereupon We opened the gates of the sky for water to pour down, and We made the earth burst forth with springs, and all this water converged to fulfill that which had been decreed.” (QS. Al Qamar/The Moon: 11-12)

And just as what you’ve seen and probably felt, when the rain has turned into one of Allah’s troops, no power shall stand in it’s way.

““The Ark sailed along with them amid mountain-like waves. Noah, spotting his son at a distance, called out to him: “My son, embark with us, and do not be with the unbelievers.” The son replied: “I will go to a mountain for refuge and it will save me from the water.” Noah said: “None can save anyone today from the Command of Allah except those on whom He may have Mercy.” Thereupon a wave swept in between the two and he was drowned.” (QS. Hud: 42-43)

Understanding the functions of this rain, which resemble the double-edged blade, the Prophet, upon seeing the clouds, was so worried and he invoked Allah the Glorified and Exalted, saying,

““O Allah I seek your refuge from the evil of this cloud.”

And if the rain has ended he prayed,

“O Allah make this rain a beneficial one. “ (Narrated by Bukhari, Abu Daud, and others)

Brother, what happened in country these days supposed to be enough to touch our hearts; how our country, which was once a green, fertile, and prosperous land, now become the ruins of memory of that golden era? At the drought, the paddy fields fell into harvest failure, and the water run so badly that some of our fellow countrymen hardly found it even just for a drink. But at the rainy season, the condition stayed unchanged, the harvest were still failing, and some of our brothers suffered not from the drought, but from the flood, slide lands, or else.

Is it probably a real evidence, that the rain that used to spread blessings no longer spread it, but in contrary, bringing the wrath of Allah the Almighty? It certainly happened due to our deeds; the ever growing infidelity, apostasy, and evil doings.

““Evil has become rife on the land and at sea  because of men’s deeds; this in order that He may cause them to have a taste of some of their deeds; perhaps they will turn back (from evil).” (QS. Ar Ruum/The Romans: 41)

At present, as resident of the world, we are affected by the result of our own destructive hands, since we could see that  the drought, the flood, the slide lands, happened almost  everywhere. However, we are still unaware of our faults -by denying that degraded faith, manner, and morality of us as the causal- , but for worse, still trying to an escape goat to blame over these calamities. We even blaming the nature, and simply said, “It’s the global warming,” or similar sentences.

Greed has pushed us to be reckless, justifying all ways to obtain profit and exploiting the richness of natural resources in scores of irresponsible ways. This greed was the result of our fear in not getting enough provision to sustain our life. We thought that by being careful and decent, we would not be able to gain riches, or we would be sunk by the wheel of life itself.

If only we could get the wisdoms that Allah the Exalted has given to us in every occurrences around us, I believe that calamities would not be afflicted upon us. Your provision is yours only, and nothing could take it away from. Just as you would be equally unable to take away your brother sustenance, or gather whatever that didn’t created for you.
The greed has covered our heart, not to hasten the provision or multiply it, but worse, to be the initial phase of the disaster and calamities around.