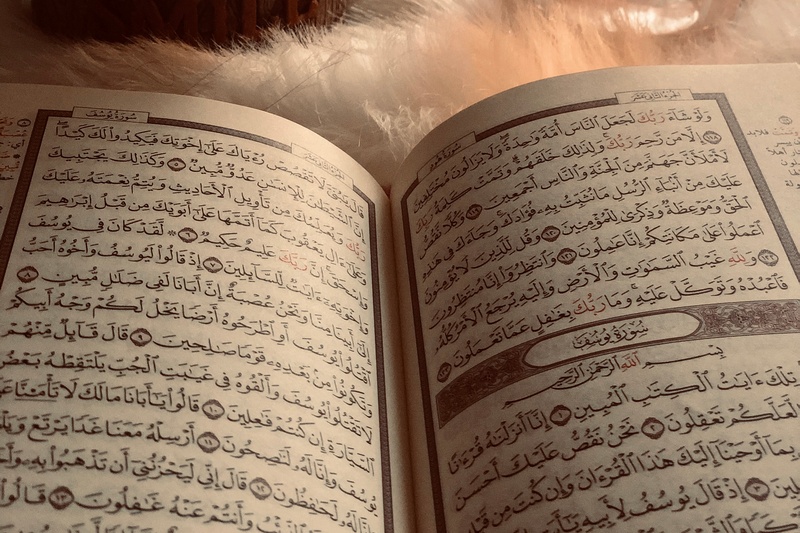 “So, (O Muhammad), remain steadfast in following the Right Way and let those with you who have returned with you (to the fold of faith and obedience), follow the Right Way as you were commanded, and do not exceed the proper limits of (devotion to Allah). For certainly He is aware of all that you do.” (Chapter Huud:112)

(So (O, Muhammad) remain steadfast in following the Right Way), i.e., be steadfast, (as you are ordered to) inside of His Holy book, believe in correct beliefs, perform righteous deeds, and abandon evildoing without straying left or right, and continue to do so until you passed away. (and let those with you who have returned with you (to the fold of faith and obedience) , i.e., the Prophet’s companions -peace and prayer of Allah be upon him-, and the believers. So that you’ll obtain great rewards later in the Day of Settlement (yaumul-hisâb) and Recompense (yaumul-jazâ’).

Definition of Steadfast
The scholars expressed different opinions in defining the word steadfast, among which are the following:
– Abu Bakr Ash Shiddiq said, upon interpreting (tsummas-taqâmû) :”doesn’t commit any kind of shirk to Allah.”[3]
– Umar Ibn Khaththab -may Allah be pleased with him- said, “Steadfast means being straight in obedience/doing orders and staying away from prohibition, without straying (left and right), like the straying of a wolf.”[4]
Abul-Qasim Al-Qusyairi said: “Steadfast is a level, by which every (religious) affair will reach perfection, and by which many goodnesses and order will be achieved.” [5]
An Nawawi said, “being straight upon obedience until his life is taken on it.”[6]
Ibn Rajab Al-Hanbali: “Walking upon a straight path, i.e., the straight religion, without turning to the right or the left. It includes performing all acts of obedience, outwardly and inwardly, and likewise, abandoning all prohibitions similarly.” [7]

The Essence of Steadfast

From those definitions, we could conclude that the essence of steadfast includes the following aspects:
Tawheed and doesn’t commit shirk
Walk upon the truth/the true religion
Carry out all orders, be it compulsory or voluntary, both outwardly and inwardly.
Abandon all prohibitions, be it the forbidden or detested one.
Be regular in obeying Allah.
Continuously be in such condition, and doesn’t turn to the right or to the left until he dies.

“So whomsoever Allah wills to guide, He opens his breast for Islam; and whomsoever He wills to let go astray, He causes his breast to become strait and constricted, as if he were climbing towards the sky. Thus Allah lays the abomination (of aversion from Islam) on those who do not believe.” (Chapter Al-An’aa/The Cattle :125)
Therefore, we ought to try our best to do various things that Allah the Glorified and Exalted approves of, so that Allah gives us His guidance and direction as rewards.
– Du’a/Prayer
Allah will grant the du’a of His slaves, thus, if we wish to be steadfast, we should ask Allah plenty of times to make us to be steadfast.
Allah the Glorified and Exalted decreed,

“(O Muhammad), when My servants ask you about Me, tell them I am quite near; I hear and answer the call of the caller whenever he calls Me. Let them listen to My call and believe in Me; perhaps they will be guided aright.” (Chapter Al Baqara/The Cow:186)

– Following the way of life of ahl sunnah wal jama’a/the saved party
It is enough for one to be sincere and diligent to obtain steadfastness. Whoever wants to be steadfast should walk upon the right path. If he doesn’t, it is futile for him to continuously walk upon the astray path, which in turns will lead him to the Hellfire. The Messenger of Allah -peace and prayer of Allah be upon him- once told that there will be only one group that is always stands out with the truth they bear, as in his saying, -peace and prayer of Allah be upon him-:

“There’ll always be a group among my followers that stands out with the truth (they bear, -ed). People who ignore them will not harm them until Allah’s order arrive, while they are still firm on the truth.”[8]

doing the self-introspection often
One who wish to obtain steadfastness should contemplate and introspects himself often. If a person doesn’t realize whether his doing is a goodness or a sin, he wont want to change. The more a person introspects himself, the more he’ll realize that his righteous deeds were so small, and the sins he committed were plenty.
‘Umar -may Allah be pleased with him- said,

Doing righteousness deed after committing evil
One of the causes of steadfasness is by following every evildoing/sin with righteous act. For example, if a person ever committed the crime of stealing, he should repent and return the goods he stole, and follow it by increasing his alms. Hopefully by giving alms, Allah the Glorified and Exalted will forgive his sins. Allah the Glorified and Exalted decreed,

Do not forgo the deeds that he used to do
The Messenger of Allah -peace and prayer of Allah be upon him- oncedenounced a man that used to worship Allah with certain ritual, who then forgo that habit, as explained in a hadith below:

“It is narrated from ‘Abdullah Ibn ‘Amr Ibn Al-‘Ash -may Allah be pleased with him-, he said that the Messenger of Allah -peace and prayer of Allah be upon him- told me, ‘O ‘Abdullah! Do not be like so-and-so, for he used to perform the night prayer, and then abandons it.”[10]

It is important to notice that the desired thing with steadfasness is not the quantity of the deed, rather, it is the continuity in it, even though the deed is small.

“And when you are resolved on a course of action put your trust in Allah. Surely Allah loves those who put their trust (in Him).” (Chapter Ali ‘Imraan/The Family of Imraan:159)

“Three things, which if they are found within a man, he’ll taste the sweetness of faith, namely: (he puts) his love of Allah and His messenger more than anything beside the two, loving a person whom he doesn’t love him except because of Allah, and hating to return to kufr as he hates if he is thrown into the fire.”[11]
By having such love, one could always motivate himself to be steadfast.

– Managing time and daily activities to be as packed and effective as possible
One who desires of steadfasness should try his best to manage his activities schedule for daily, weekly, monthly, and yearly purposes respectively. For daily activities, for example: when he wants to get used to perform the night prayer, he should attempt to sleep early (not long after the isha prayer), and set up an alarm or the like in order to help him to wake up in the last one third of the night.

Performing his worships with his best, as if it is the last one before he passes away
One who desires of steadfastness should get himself used to perform a certain worship while imagining as if he wont live any longer, hence he’ll put his best effort in it and increasing the quality of his worship.

Introspecting himself for every good deed that he left and evil deed that he committed
After setting some targets of worship and good deeds, one needs to introspect himself every day, in order to make the better of himself.

Willing to endure patience and restrain his desire for years
It is not easy to be steadfast. We shall be willing to restrain our desires and striving for years.
Muhammad Ibn Al-Munkadir said,

“I restrained my soul for forty years, only by that that I could reach steadfasness.”[12]

“And who is fairer in speech than he who calls to Allah and acts righteously and says: “I am a Muslim”? (Chapter Fushshilat/They are Expounded:33)
It shows that there is a close relation between steadfasness and da’wa.

The absence of a trusted adviser in an area is a major calamity that will hamper people’s attempt to be steadfast. Therefore, I remind any reader whose living area doesn’t have any adviser (ustadz, religious teacher) to be haste in inviting them, or move to an area which some advisers live in, or to do any means to get their advices all the time.
Getting too involved with the worldly affairs
Getting too involved with the worldly affairs could also hamper the steadfasness. Allah the Glorified and Exalted decreed,

“The life of this world is merely an illusory enjoyment.” (Chapter Aali Imraan/The Family of Imraan:52)

Having a Bad Friend
There’s no doubt that a bad friend could hugely influence one’s character. Thus, choose a good and righteous friend that could influence us to be steadfast.

“That is the glad tidings in advance for a believer.” [17]

Being desperate of Allah’s mercy and forgiveness, hence the hesitance to repent
People who are wallowing in his sins usually find a whisper in his heart, “How will I be able to be steadfast, while I’ve been overwhelming with my sin and I’ve almost never done anything good?”.
Know that Allah the Glorified and Exalted is The Forgiver and He accepts the repentance of His slaves. Allah the Glorified and Exalted decreed,

“(53) Tell them, (O Prophet): “My servants who have committed excesses against themselves, do not despair of Allah’s Mercy. Surely Allah forgives all sins. He is Most Forgiving, Most Merciful. (54) Turn to your Lord and surrender yourselves to Him before the chastisement over-takes you; for then you will receive no help.” (Chapter Az-Zumar/The Troops:53-54)

The Virtues of being Steadfast
There are plenty of virtues for people who are able to be steadfast. In general, those virtues could are summed up in the three verses below:

“(30) Those who say “Allah is our Lord” and then remain steadfast, upon them descend angels (and say): “Do not fear nor grieve, and receive good tidings of Paradise which you were promised. (31) We are your companions in this world and in the Hereafter. There you shall have all that you desire and all what you will ask for. (32) This is by way of hospitality from Him Who is Most Forgiving, Most Merciful.” (Chapter Fushshilat/They are Expounded:30-32)
Az Zuhaili said, “…Therefore, religion is a way to achieve goodness for human being and drive them away from evils and sins. The Qur’an suggests (us) to be steadfast and promises the greatest reward, as revealed in the following verses…” (Then he mentioned the three verses above, -ed). [18]
Ibn al-Qayyim -may Allah have mercy on him- said [19], “….Therefore, the religion (of Islam) is all summed up within Allah’s decree [20] :

What a great virtues for those with steadfasness, isn’t it?

The hardest verse to carry out according to the Prophet -peace and prayer of Allah be upon him- was the verse that contains the order to be steadfast, as in the chapter Hud.
The essence of steadfasness includes: staying upon the truth, carrying out every order, abandoning every prohibition, obeying the orders regularly and continuously, and maintaining these qualities until the end of life.
One who wishes to be steadfast should struggle to look for the causes of steadfasness.
The easiest way to be steadfast is to make the best effort and strive to achieve it.
There are some things that could ruin/hamper one’s path to steadfastness, thus, a believer should try his best to avoid it.
A person who’s able to achieve steadfasness will be rewarded with a tremendous rewards, as we’ve mentioned earlier.
Thereby, I end this article, may Allah renders us to be steadfast people until we die. Amin.