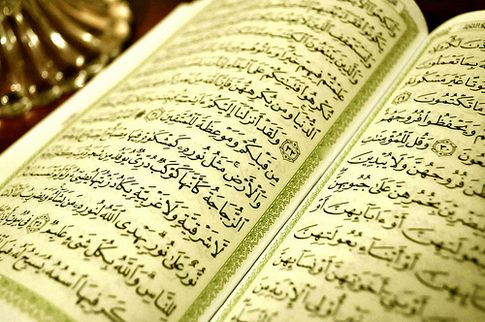 Al Qur’an (The Qur’an), was not revealed all at once to the messenger of Allah -Shallallaahu’alayh wa Sallam (may blessings and peace be upon him), but gradually revealed, soorah to soorah, verses to verses, according to the event occurred at that time. So, what was the wisdom beyond it? Wisdoms, or purposes of such revelation were:

To strengthen the heart of Prophet Muhammad -may blessings and peace be upon him-. Allah decreed: “And those who disbelieve say, “Why was the Qur’an not revealed to him all at once?” Thus [it is] that We may strengthen thereby your heart. And We have spaced it distinctly (recited it with distinct recitation).” (Al Furqaan/The Criterian: 32)

According to Abu Syamah, the verse explained that Allah did not revealed the Qur’an all at once in purpose, unlike the previous book of Him descended upon previous messengers. If so, then what was His purpose, and secret behind it? It was to strengthen the heart of Prophet Muhammad -may blessings and peace be upon him- . Because by the gradual revelation, which was appropriating the event, condition, and situation occurred at that time, it will be strongly recorded in mind and heart, and leave a deeper impression for one who received it (Muhammad).

The coming of the angel to him will also be more frequently, thus psychologically renew his spirits in carrying out the teaching he was obliged to. He (Muhammad -may blessings and peace be upon him-) must be very happy by the visits, which was hard to expressed. And because of this, the best moment in the month of Ramadan, is due to his reunion with the angel Gabriel.

3. To make it easier to be understood and memorized. It was true that, by the gradual revelation of the Qur’an, mankind was easier to memorize it, and to understand it’s meaning, particularly for illiterate people as the Arabs at that time. The gradual pattern of revelation was surely help them in memorizing and understanding it’s meaning. And once the verses of Qur’an revealed, they was directly memorized, understood, and practiced by the companions in their daily life. That is why, Umar Ibn Khattab once said,

4. To make the muslims enthusiast in receiving the teaching of Qur’an, and to make them zealous in practicing it. By gradual revelation, muslims at that time were always expecting it, and missing the time of revelation of The verses. Particularly at the time they most need of it, such as the verses told about the false accusations from the hypocrites to the mother of the believers, Aisha, and verses explained about li’an.

5. To accompany to events happened among muslims at that time, and to gradually establish the rulings for specific matters. The Qur’an started to be revealed gradually: from the most important matters, followed by the lower priorities in urgency. Since the most essential matter in Islam is faith, then the first thing prioritized to be explained and revealed through Qur’an were about the faith in Allah, His angels, His books, His messengers, the Hour, the resurrection, and the heaven and the hellfire. Those were supported by rational arguments (daleel) aimed to vanish the beliefs of paganism which were deeply trusted by the disbelievers, to be replaced by the seeds of righteous faith in Islam.

After the Islamic beliefs grew and rooted strongly inside their hearts, that was the time Allah sent down the verses urged them to perform noble deeds, and prevented them from doing evil and wicked actions,  to extinct the evildoings and damages to their roots. Also the verses explained about the legal and illegal in foods, beverages, properties, honors, blood/murders, etc. Thus, the Qur’an was revealed properly according to the events surrounded muslims life, along with their long and historical strives to establish the religion of Allah on His earth. And the verses were endlessly supporting and motivating them through their struggles.

Let us take a look carefully at the examples below:

Soorah Al An’am (The Cattle) is termed soorah makkiya, because it was revealed while the prophet was still in Mecca. The contents explained much upon faith, beliefs, tawheed (oneness of Allah), the danger of shirk, and the legal or illegal ones.

“Say, “Come, I will explain what your Lord has prohibited to you. [He commands] that you not associate anything with him, and to parents, good treatment, and do not kill your children out of poverty; We will provide for you and them.” (Al An’am,/The Cattle: 152)

After that, the verses detailed about the rulings came in Medina, such as verser about the prohibition of usury and the legal state of trading. About adultery, was also prohibited in Mecca, in the verse of:

“And do not approach unlawful sexual intercourse. Indeed, it is ever an immorality and is evil as away.” (Al Isra’/The night journey:32)

But the verses explained the details of punishment for the adulteress came in Medina afterward.

2. Upon the prohibition of khamr (alcoholic drugs). The first verse to come was the verse of:

“And from fruits of the palm trees and the grapevines you take an intoxicant and good provisions…” (An Nahl/The Bee: 67)

After that, came the verse of:

“They ask you about wine and gambling. Say, “In them is great sin and [yet, some] benefit for people. But their sin is greater than their benefit.” (Al Baqara/The Cow: 219)

In that verse, it was stated that the wine has some temporary benefits for mankind, but it’s danger is larger in effects toward their body; it could deteriorate their minds, it was a waste for their wealth, and could lead to various problems of crime and evil among society. After that verse, came the strict verse prohibited the drunk from performing prayers.

“O you who have believed, do not approach prayer while you are intoxicated until you know what you are saying.” (An Nisaa’/The Women: 43)

After they acknowledged and recognized that drunk while praying was prohibited, then the stricter verse was revealed:

“O you who have believed, indeed intoxicants, gambling, [sacrificing on] stone alters [to other than Allah] and divining arrows are but defilement from the work of satan, so avoid it that you may be successful.” (Al Maida/The Table Spread: 90)

To make it clearer about the gradual pattern of revelation of the Qur’an, let’s take a look at what had been said by the mother of the believers, Aisha, below: