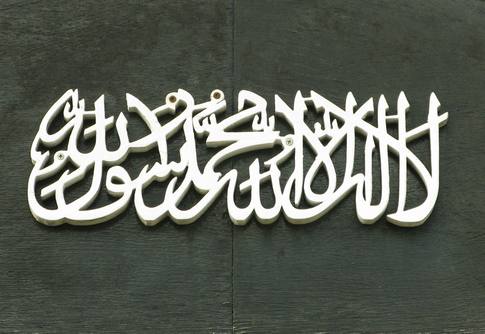 In terminology, “shahada/testimony” means “to tell the truth in front of the witnesses”. (Al Mausu’ah Al Fiqhiyyah Al Kuwaitiyah, on the word: shahadah). Based on this meaning, the word ‘shahadah’ possess a more global meaning, including all forms of testimony, such as testimony given in the court, and not specifically points to the ritual done when someone embraces Islam.

Shahadatain (The 2 Testimony) and It’s Meaning

Shahadatain means 2 sentences of shahadah (testimony). These 2 words are gate for unbelievers to embrace Islam. The pronunciation of shahadatain is as follows:

When someone uttered this testimony, it means that he has admitted by his words and his heart that there is no single thing in this world possess the right to be worshipped and to be the aim of worshipping but Allah. And all that is worshipped but Allah are null and wrong, and must never be worshipped.

The meaning of “Muhammad is The Messenger of Allah”

The Function of Testimony in Islam

Shahadah or testimony is the first gate to pass for someone who want to embrace Islam, because it contains the confession of The Oneness of Allah in creation and orders (rububiyyah) and in having the right to be worshipped (uluhiyah).

Allah mentioned in His Book:

“And We sent not before you any messenger except we revealed to him that, There is no deity except Me, so worship Me.” (Al Anbiya’/The Prophets: 25)

Imam An Nawawee said, “Ahlu as Sunnah agreed that one could not be considered as The Believer, until he believes firmly upon the truth of Islam by his heart, free from any doubt, and he declares the testimony. If he missed one of it, then he is not a believer, unless he could not speak the words of testimony due to the deformity on his tongue, or in the verge of death. At such conditions, it is not possible for him to express the testimony, and he is still termed as a believer.” (Syarh Muslim li an Nawawee, 1:149)

However, some of the scholars believe that by trusting Islam’s truth by heart, his faith between him and Allah is already considered valid. While the expression of testimony is only a requirement to obtain a status as a believer, in this world. Thus, by declaring the testimony, one has been admitted as muslim who possesses rights and liabilities as the other Muslim.’ (Al Mausu’ah Al Fiqhiyyah Al Kuwaityyah, 4:267)

Hence, if someone intends to declare the testimony, he must bring witnesses from muslim, and the declaration shall not be disguised since it relates to his status among his muslim brothers.