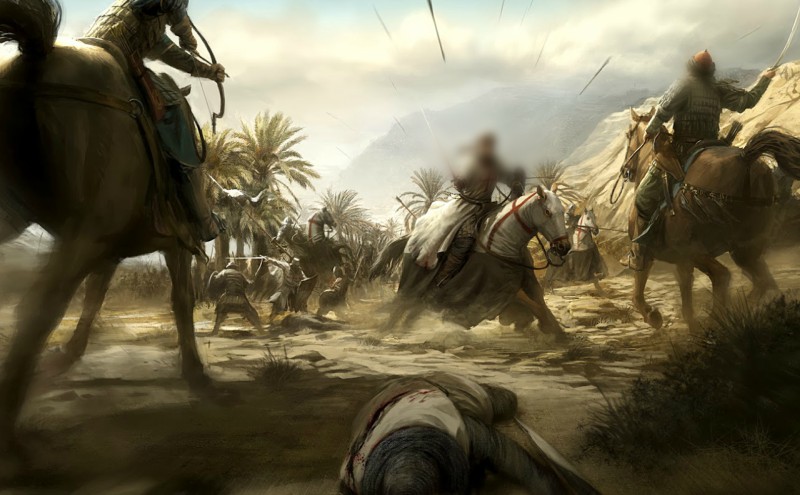 The Battle of Badr, dawn of the victory

“For sure Allah helped you at Badr when you were utterly weak. Beware, then, of Allah; perhaps you will be thankful.”( Ali Imran : 123)

When Prophet Muhammad heard that a group of Quraish merchant led by Abu Sufyan was returning from Sham, he intended to interrupted their journey (since to reach Mecca, the merchants should pass Medina because Medina is located between Sham and Mecca). The Messenger of Allah then ordered his companions to prepare themselves to stop them. He said, “Indeed, I’ve been told (by his spy) that the caravan of Abu Sufyan will pass through Medina. Will you go out to intercept it?”. The companions, filled with love and obedience to their Prophet, said, “Absolutely!”. Then the Messenger of Allah went out with his companions. He didn’t force every one of them to join him. He only required Anyone who has mounts which is ready to be used, to join them. Thus, companions from the emigrants and the helpers gathered up into a number of 313 persons, and they brought with them 2 horses and 70 camels that they mounted alternately, 1 camel for three persons, since they only intended to intercept, and not to spark a battle.

Abu Sufyan was aware about interceptions that frequently happened to a caravan. Thus he asked anyone whom he met about the activity of Prophet Muhammad and his companions. When he was told that Prophet Muhammad and his companions were marching ahed to intercept him, he sent a delegation to Mecca to convey this urgent matter and ask for help to face the Prophet’s troop.

The Soldiers of Disbeliever Arrived

Thus, the disbelievers of Quraish went out arrogantly. They were armed with 1000 personnels with complete weapons, a stark contrast to the believers who only had 313 persons on their side, with minimum preparation. But after they went out of Mecca, they worried that the tribe of Bakr, who was their enemy, will attack Mecca since their defense at Mecca was weakened due to the great number of them went out to the battle. However, it has been divinely ordained that the enemies of Islam will help one another in flagging their enmity to Islam. Just at that time, the devil -cursed him- transformed himself as Suraqah bin Malik Al-Madlaji, a honored man from the Tribe of Kinanah, and met them, saying, “Indeed, I am your neighbor. We wont leave your back with something that you hate (i.e., there will be no attack to your side).” Hence they became calm and settled to move forward to the troop of the Prophet.

After that, a delegation from Abu Sufyan arrived to inform them that Abu Sufyan and his caravan were saved since they managed to avoid the interception by passing through the coastal area and thus he asked the troops to return to Mecca. But Abu Jahl said arrogantly, “By Allah, we will not return until we arrive at Badr, and we’ll camp there for three days (to feast), we’ll slaughter camel and feast there, we’ll drink intoxicant, and listen to the songs of the female slaves, and the Arabs will hear about what we did and gathered (of the large troop) and they (the Arabs) will forever respect us.”

The news was also reached the Messenger of Allah that the disbelievers of Quraish with a great number of soldiers and complete weapon were heading to Badr to face him and his companions. Thus he asked for his companions’ opinion. Among them were some people who afraid to face the disbelievers of Quraish because the muslims weren’t ready at that time, since they only went out to intercept the caravan and not to a battle. Then the dignitaries of the emigrants, such as Abu Bakar Ash-Shiddiq, Umar bin Khattab and Miqdad Ibn Amr spoke, supporting the idea of facing the disbelievers of Quraish. Miqdad Ibn Amr said, “By Allah, we wont say as the children of Israel said to Prophet Moses, ‘Go, O Moses to war, go with your Lord, indeed, we’ll just sit here”, but we say, ” Forward, O Allah’s apostle, go with your Lord to war, verily, we’ll go with you to war.”

The the Prophet asked for opinions of the Helpers, who were the most of their personnels. Then Sa’d Ibn Muadz, leader of the Helpers said, “As if you are offering us (to fight against the disbelievers of Quraish), O Messenger of Allah, by He Who sends you with the truth, had you asked us to show you a sea, then you crossed over it, indeed, we will cross it over with you until none of us left, and we wont hate to face our enemy tomorrow. We’ll be truly patient in the battle and honest in fighting. May Allah show you something from us that can soothe your eyes. So, forward with us, with Allah’s blessing.” Thus,  due to the willingness of the muslims to fight at his side, the Messenger of Allah became settled and calmed.

O Allah, Destroy them This Morning

The Muslims arrived at Badr and chose a place near the water, the idea of Al-Khabab bin Al-Mundzir. And the disbelievers of Quraish also arrived at Badr. The muslims made camps to be the Messenger of Allah’s headquarter.

At the morning of Friday, 17th of the blissful Ramadan, the second year of Hijra, the two armies faced one another. Then the Messenger of Allah prayed, “O Allah, the Quraish are truly ready to face us, with their horses, and with their arrogance in defying You and belying Your messenger. O Allah, I beg for Your help that You’ve promised me of. O Allah, destroy them this morning.

Before the battle began, three of the disbelievers of Quraish went forward to challenge the muslims on one-on-one duel. They were Utbah Ibn Rabi’ah and his brother Syaibah, and Al Walid Ibn Utbah. To face them, three men of the Helpers stepped forward. But the three men of Quraish refused to fight them. instead, they asked men from their own kind to fight them, that is, from the emigrants of Quraish. Thus three heroes of the emigrants; Ali bin Abi Thalib, Hamzah, lion of Allah, and Ubaidah bin Al-Harist stepped forward. After that, Ali was managed to kill Syaibah easily, as Hamzah did on Utbah, and Ubaidah and Al Walid wounded each other, until Ali and Hamzah killed Al Walid.

Seeing their three aces went down to the muslims’ heroes, the disbelievers went crazy. They started to attack the muslims. In another place, the Messenger of Allah instructed his troop and pumped up their spirit to fight. After that, commanding his companions to rush forward, he said, “Get up and head to Paradise as wide as the sky and the earth!!”. Hearing that, Umair Ibn Al Humam from the Helpers asked him just to make sure, “O Messenger of Allah, the Paradise, as wide as the sky and the earth?”. The Messenger replied, “Yes”. Then Umair said, “Bakhin, bakhin (a saying the Arabs said to express their amazement over a thing).” The Messenger asked him, “What causes you to speak like that?”. Umair replied, “Nothing, by Allah, O Messenger of Allah, except I wish to be its dweller.” The Messenger said, “You are one of its dwellers.” Thus Umair was highly motivated to fight, and in this battle, Umair was killed and his wish was fulfilled.

And The Battle Began…

The battle started fiercely between the 313 believers, armed with their faith and piety, even though their weapons and numbers were far below the disbelievers, who outnumbered them by triple. but the disbelievers were fighting with difficulties against the muslims, despite their large number of personnels. In this battle, the Messenger of Allah wasn’t just watching it silently, instead, he himself mingled and fought the battle, as Ali Ibn Abi Thalib witnessed, “Indeed, we fought at the Battle of Badr and we were sheltering behind the Messenger of Allah, he fought nearer to the enemy’s troop. And that time, he was the fiercest in fight.”

In this battle, Allah sent down His help to the muslims, as Imam Muslim narrated that when one of the muslim soldier chased a disbeliever, he heard from above, sound of a whip and voice of a horseman, saying, “Forward, O Khaizum (name of the angel’s horse).” Then suddenly the disbeliever fell and his nose was cut off and his face was ruined, as if it is hit by a whip. Thus the soldier told the Messenger of Allah of it, and he said, “You’re right,

it is the help from the third heaven.” After that, the angels beheaded the disbelievers. Thus their heads were torn apart without anyone knew who cut it off. That is the help that Allah sent to His slaves who defended His religion.

Hence, the disbelievers went topsy turvy, and their impending lost was before their eyes. In this battle, the enemies of Allah, such as Abu Jahl, who was dubbed “The Pharaoh of this ummah”, Umayyah bin Khalaf, and Al-Ash bin Hisyam bin Mughirah were killed. And the number of casualties from the disbelievers side was 70 people, together with 70 that were held captives. Whereas the muslims lost 14 of the companions, 6 from the emigrants and 8 from the Helpers. .

Lessons from This Battle

2. That in fact, the disbelievers knew that Allah is The Creator, as Abu Jahl’ vowed using the name of Allah when they departed to fight. However, they still ascribed partner to Allah and made the idols as the object that they worshipped and asked for help.

3. That this battle was the first great battle and it decided the existence of the muslims next. As the Messenger prayed before the beginning of the battle, “O Allah, if You destroy this people (i.e., the muslims), the You wont be worshipped anymore, forever.”

4. Allah will help His slaves who fight to defend His religion, and grant them victory even though the personnel and weapon of the muslims are minimum, as with the descent of the angles to help the muslims.

5. After recognizing how difficult the struggle of the Messenger and his companions in defending Allah’s religion, we should also struggle, as the next generation of Islam, to defend this religion by practicing the orders of Allah and His messenger, and protecting this religion from the stain of shirk and innovation that the Messenger never taught before; this is also a form of our reward to them.