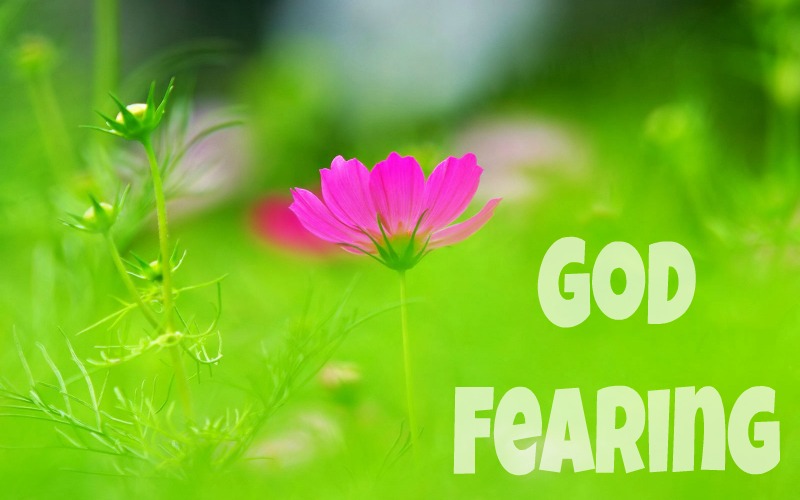 The title of this article is answer of Ka’ab Al-Ahbar to Umar Ibn Khattab, when he asked about the meaning of god-fearing to Ka’ab. Then Ka’ab said, “What will you do?”. Umar replied, “I’ll be careful not to get pricked.” Ka’ab responded, “That’s god-fearing!”.

Abandon all sins, even the smallest one

Or the great, cause that’s the essence of god-fearing

Do as a walker who walks on a rocky road

He avoids every spike that he sees

Never look down to a minor sin, coz

Indeed, a big mountain is built with pebbles

A muslim is supposed to ask Allah the Exalted to bestow upon him, the god-fearing. Truly, this kind of prayer is a one of the prayers the Prophet used to recite, whereas he is the most god-fearing among men, and the most righteous. He said, “O Allah, indeed, I beg you (to give me) of guidance, piety, purity, and the feeling of contentment with You.” (Narrated by Muslim).

God-fearing is the best of garment, that Allah has ordered us to wear, and the best of provision that He has ordered us to provide ourselves with. Aside from piety or god-fearing, there is nothing worthy to be provision in our journey to find a place in the  Hereafter that is full of joy, everlasting joy that will never end. Since the world will surely end one day. God-fearing is also the right of Allah the Exalted over all of His creations; that is, by them to fear Him with its truest form. And god-fearing is His order to all generations of human being, from its first to the last. Allah the Exalted decree, which can be translated as, “We enjoined upon those who were given the Book before you, and also yourselves, to have fear of Allah” .(Annisa/The Women :131

The Advice about God-fearing

When the Messenger of Allah -peace and prayer of Allah be upon him- preached on the his farewell hajj, he enjoined all to fear Allah the Exalted and to obey and follow their leader (of the believers, -ed). (Narrated by Muslim, no. 1297, 1838)

The pious predecessors also enjoin each other to fear Allah. Abu Bakr Ash Shiddiq -may Allah be pleased with him- said in his speech, “And next, I advise you to fear Allah the Exalted, always praise Him as He is The One deserve to be praised, unite your hope and fear, and ask Allah sincerely, because Allah the Glorified and Exalted praised Zachary and his family. Allah the Exalted decreed, “Verily they hastened in doing good works and called upon Us with longing and fear, and humbled themselves to Us.” (Al-Anbiya/The Prophets : 90)

A man told Yunus Ibn ‘Ubaid, “Advise me!”, thus he said, “I advise you to fear Allah, and do good, because verily, Allah is with the god-fearing ones and those who do good.”

And it was said to a tabeen at his deathbed, “Please advise us!” Then he said, “I advise you, with the end part of chapter An Nahl, “For surely Allah is with those who hold Him in fear and do good.” (An-Nahl/The Bee ;128)

Fear Him, O slaves of Allah!

Etymologically, “god-fearing” (taqwa) means self-watching or being cautious. As for the sharia terms, the scholars have various definition regarding this word. Generally, it all ends in one definition, that is to perform order and avoid all forbidden things.

Ali Ibn Abi Thalib said, “God-fearing means fearing Allah the Exalted, The Almighty, realizing the content of the Qur’an, feeling content with the little, and preparing provision for the journey to the Hereafter.”

Allah the Exalted decreed, “Narrate to them in all truth the story of the two sons of Adam. When both of them made an offering and it was accepted from one of them and was not accepted from the other, the latter said: “I will surely kill you.” Thereupon the former said: “Allah only accepts offerings from the God-fearing.” (Al-Maidah/The Table Spread : 27)

People have different opinions regarding Allah’s verse, “Allah only accepts offerings from the God-fearing”;

– The khawarij and mu’tazila groups believe that good deed will not be accepted except from a person who fears his God in absolute way, meaning that he never commit any major sin.

– The murji’ah group believe that good deed will only accepted from a person who keeps himself away from shirk. They believe that person who commit major sin is still categorized as god-fearer.

– as for the ahl sunnah wal jama’ah, they believed that good deed will be accepted from anyone who is fear His Lord, in that deed; meaning that a deed sincerely done because of Allah the Exalted alone, and it appropriated His order (by taking example from the messenger). Thus, whoever fears Allah in his deed, then his deed will be accepted even though he commits other wickedness. And whoever doesn’t fear Allah in his deed, then the deed will not be accepted, even though he obeys Allah in other deeds or matters.

Fudhail Ibn ‘Iyadh – may Allah have mercy on him- commented about the verse of Allah the Exalted: “Who created death and life that He might try you as to which of you is better in deed.”, “that the best of deed is the sincerest and most correct one.” Then people asked him, “O Abu Ali, what is the meaning of the sincerest and most correct deed?”. He answered, “Indeed, a sincere but incorrect deed will not be accepted, and a correct but insincere deed will not be accepted either. A deed will be accepted if it is correct and done sincerely. Sincere means it is done to Allah (to obtain Allah’s please and reward, -ed) alone. whereas correct means it is in accordance with sunnah of Allah’s messenger – peace and prayer of Allah be upon him-.”

As we are all ordered to fear Allah the Exalted alone, put our trust in Him alone, turn our hope to Him alone, beg for help only to Him, and worship Him alone, we are also ordered to follow His messenger – peace and prayer of Allah be upon him-, obey him, and set him as our role model. What legal is the one he legalized, and what illegal is what he forbade, and religious teaching is everything he had established. Allah the Exalted decreed: “Would that they were content with what Allah and His Messenger gave them, and were to say: “Allah suffices for us, and Allah will give us out of His bounty and so will His Messenger. It is to Allah alone that we turn with hope.” (Chapter At-Taubah : 59)

Allah the Exalted has established that the authority to make law belong only to Him and His messenger, as in His decree:”So accept whatever the Messenger gives you, and refrain from whatever he forbids you. And fear Allah: verily Allah is Most Stern in retribution. ” Chapter Al-Hasyr : 7)

Imam Ibn Rajab -may Allah have mercy on him- said, “The main part of knowledge is knowledge about Allah the Exalted, that entice fear and love to Him, and draw a person to always get near Him and yearn for Him. Nest is knowledge about the laws of Allah the Exalted and everything that He -the Exalted – loves and pleases of from His slaves, whether it is saying, deed, condition, or belief. Whoever has realized these two knowledges within him, his knowledge is beneficial knowledge. He attains beneficial knowledge, solemn heart, content soul, and answered prayer.”

Abu Darda’ – may Allah be pleased with him- said, “You’ll never be a god-fearer, until you have knowledge, and that knowledge will not make you better until you practice it.”

Now it is clear to us that knowledge is an absolute requirement to attain the true quality of god-fearing.

There are plenty of the virtues of god-fearing revealed in the Qur’an, among which are:

It is a deed that could raise a man’s rank in Paradise (See chapter Az-Zumar : 20)

Allah the Exalted is with those who fear Him. (See chapter An-Nahl : 128)

God-fearing is the best provision of a slave in this world and in the Hereafter (See chapter Al-Baqoroh : 197)

Their worldly affairs will be made easier, as will their Hereafter affairs, and they will get abundance of sustenances. (see chapter Ath-Tholaq : 4)

The Paradise will be inherited by those who fear their God (See chapter Maryam : 63)

Characteristics of The God-Fearing One

Allah the Exalted decreed, which can be translated as, “And hasten to the forgiveness of your Lord and to a Paradise as vast as the heavens and the earth, prepared for the God-fearing. who spend in the way of Allah both in affluence and hardship, who restrain their anger, and forgive others. Allah loves such good-doers. These are the ones who, when they commit any indecency or wrong themselves, instantly remember Allah and implore forgiveness for their sins – for who will forgive sins save Allah? – and do not wilfully persist in the wrong they had committed. They shall be recompensed by forgiveness from their Lord and by Gardens beneath which rivers flow; there they shall abide. How good is the reward of those who earnestly labour!.” (Chapter Ali’Imron/ The Family of Imran : 133-136)