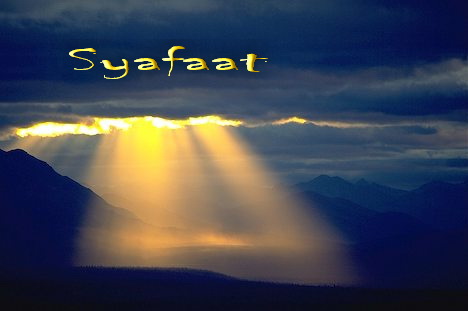 What is the meaning of Intercession?

“What is intercession, and how many kinds it has?”

The word “asy syafa’ah” (intercession) comes from the word “asy syaf’u”, which is the antonym of “al witru” (odd number), which means completing the odd number (asy syaf’u), as you add up one into two and three into four. This is its etymologic meaning.

There are two kinds of intercession:

[a]. Firstly: An established, correct intercession

He replied, “A person who says, “None has the right to be worshipped but Allah, sincerely from his heart.”

It can be achieved by fulfilling three requirements:

These requirements has been revealed globally in Allah the Exalted’s many verses, such as:

“Numerous are the angels in the heavens; yet their intercession shall be of no avail, except in regard to those whom He grants the leave of intercession and whose plea He is pleased to accept.” (Chapter an Najm/The Star: 26)

And is specified in His verse,

“Allah, the Ever-Living, the Self-Subsisting by Whom all subsist, there is no god but He. Neither slumber seizes Him, nor sleep; to Him belongs all that is in the heavens and all that is in the earth. Who is there who might intercede with Him save with His leave? He knows what lies before them and what is hidden from them, whereas they cannot attain to anything of His knowledge save what He wills them to attain. His Dominion overspreads the heavens and the earth, and their upholding wearies Him not. He is All-High, All-Glorious.” (Chapter Al Baqara/The Cow:255)

“On that Day intercession shall not avail save of him whom the Most Compassionate Lord permits, and whose word of intercession is pleasing to Him.” ( Chapter [Thaha : 109]

“He knows whatever is before them and whatsoever is remote from them and they do not intercede except for him, intercession on whose behalf pleases Him, and they stand constantly in awe of Him.” (Chapter Al-Anbiya : 28]

These three requirements must be fulfilled to obtain an intercession.

Furthermore, the scholars – may Allah have mercy on them- have divided this kind of intercession into two:

The meaning of general here is that Allah the Exalted allows anyone that He wish from among his righteous slaves to intercede for the sake of people He pleases of. This kind of intercession can be obtained from Prophet Muhammad -peace and prayer of Allah be upon him – and from other prophets, shiddiqin, the martyrs, and pious men. It can be an intercession given to the believers who dwell in the Hell due to their evil acts, so that they can escape the hellfire.

It is the exclusive right of Prophet Muhammad -peace and prayer of Allah be upon him- and the greatest of all intercession. It is the intercession in the Hereafter, when all human being are afflicted with grief and hardship that they can’t bear, thus they ask people who can beg Allah the Almighty to give them intercession in order to save them from their unbearable condition.

They come to Adam, then Noah, then Ibrahim, Moses, and Jesus, – peace be upon them- but all of them are incapable of granting their wishes of intercession, until finally they come to Prophet Muhammad – peace and prayer of Allah be upon him-, and he stand up to beg Allah the Almighty for His intercession,

to save His slaves from their condition. Allah grants his prayer and accept his intercession. This is among the Commendable Place (Al maqam al Mahmud) which Allah has promised to him in His verse, which can be translated as,

“And rise from sleep during the night as well – this is an additional Prayer for you. Possibly your Lord will raise you to an honored position. ” (Chapter Al Isra/The Night Journey:79)

“The intercession of the intercessors shall then be of no avail to them.” [Chapter Al-Muddatsir/The Cloaked One: 48]

That is because of Allah displeases of their polytheism thus it is impossible for Him to allow anyone to intercede for them, since intercession will only be given to the one He pleases of. Allah displeases of infidelity and destruction to happen among His slaves. The dependency of the polytheists to the deities that they worshipped and they claimed,

“They are the intercessor for us in Allah’s side”, is a wrong and useless dependency.