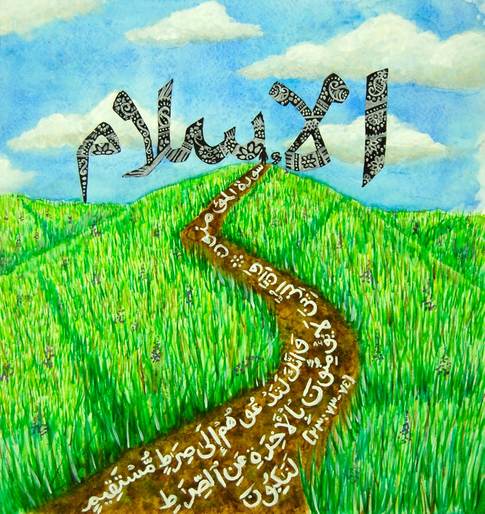 Etymologically, the word ‘Islam‘ has several meanings. Amongst them are:

While in terminology, ‘Islam‘ means submitting of oneself to Allah by worshipping Him alone, obeying His commands in performing righteous deeds, and abandoning shirk and making the one committing shirk as enemy (Tsalatsatul Ushul/The 3 Foundations, page 7)

Some scholars gave explanation regarding this terminological meaning by detailing the meaning of Islam into 2 parts, General and particular meaning, respectively. (Husul Al Ma’mul, page 7)

First: Islam in general, means worshipping Allah alone without attributing any equals to Him. This meaning includes all teaching conveyed by the prophets and contained in all Holy Books He had descended.

“Indeed We sent down the Torah, in which was guidance and light. The prophets who submitted (to Allah) judged by it for the Jews.” (Al Maida/The Table Spread: 44)

Second: Islam in particular, refers to the religion brought by Prophet Muhammad -peace and blessings of Allah be upon him-. As the final teaching that ends the calling of prophets before him, and by this, Allah will only accept Islam which appropriating this last teaching.

Allah will only accept the religion of Islam

Every human being will receive a security of happiness in Hereafter, if he embraces Islam as his religion. One will be dubbed as embracing Islam if he follows the guidance of the prophet who was sent to him. Allah decreed,

“And (mention) the Day He will call them and say, “What did you answer the messengers?” (Al Qashash/The Stories: 65)

Allah will ask mankind at the Day of Resurrection, about their respond to the prophets whom was delegated to the them.  Did they believe in them, and follow their guidance, or did they objected to and set war against them?

The indication that Allah will only accept Islam, comes in His verse:

“Indeed, the religion in the sight of Allah is Islam.” (Ali Imran/The Family of Imran: 19)

The Five Pillars of Islam

The Pillars of Islam are five major things: testimony (shahaadah) of ‘Laa ilaaha illallah‘ (None has the right to be worshipped but Allah), obligational prayers, obligational charity, fasts, and hajj or pilgrimage. These pillars are taken from hadith of the messenger of Allah -peace and blessings of Allah may be upon him- where he said,

“Islam is (based on) the following five principles: (1) to testify that ‘Laa ilaaha illallah wa anna Muhammad -ar-Rasul Allah (none has the right to be worshipped but Allah and that Muhammad is the messenger of Allah), (2) Iqaamat as salat (to perform the [compulsory congregational] Salat/prayers), (3) to pay Zakat, (4) to perform Hajj (pilgrimage to Makkah), (5) to observe Saum (fasts [according to Islamic teachings]) during the month of Ramadan.” (Collected by Bukhari in hadith no. 8, and Muslim in hadith no. 16)

Testimony or shahaadah is the Gate to Embrace Islam

The non muslim will be able to embrace Islam as their religion, by reciting the two sentence of testimonies (shahaadah). The textual form of shahaadah is as follows:

“I testify that none has the right to be worshipped but Allah.”
“and I testify that Muhammad is the slave and the messenger of Allah.”

The first testimony is the declaration of oneself to worship Allah alone, submitting himself and obeying His law (shari’ah). While the second one is a pledge of loyalty that one is ready to follow the teaching of Prophet Muhammad -peace and blessings of Allah be upon him-, defend his religion, call people to it, and detest all who refuses to embrace his religion.

First: Testify the shahaadah, witnessed by some or several Muslims.

Declaration of testimony/shahaadah must be witnessed by several Muslims, 2 in minimal. The witnesses will be functioned as living proofs in the eye of society, proving that the declarator has became a Muslim, and is rightful to treatment and rights as the other muslim.

The declaration should not confined to be in mosque/masjid, but is able to be done at places beside it.

Second: Bathing, by pouring water to the whole body parts, from the hair tip to toes.

Salat is a vital part of Islam, even becomes a mean to differentiate a believr and disbeliever. The Prophet -peace and blessings of Allah may be upon him- said, “The divider between us (the believers) and them (disbelievers) is salat. Whoever left it, then he becomes disbeliever.” (Collected by Ahmad, and An Nasa’i, classed sahih by Al Albani)

Thus, every one who has declared himself to embrace Islam, is obliged to perform the five compulsory salat. If he is incapable to perform it alone, or does not memorize any of it’s du’aa, then he must perform it together with the other muslim. After that, he must learn how to correctly perform a salat.

Fourth: Paying the obligational charity (Zakat) taken fro his wealth, if he has fulfill the criteria below:

If his wealth already fulfill the criteria, he must pay his Zakat, by taking 2.5% of the total amount of it, and hands it to the poor.

The Rights of Muslim

After someone embraced Islam, he will have certain rights and obligations. Amongst them are:

a. Deserve to enter the Heaven of Allah, if he dies in a state of Muslim.

“Indeed, Allah will admit those who believe and perform righteous deeds, to gardens beneath which rivers flow, Indeed, Allah does what He intends.” (Al Hajj/The Pilgrimage: 14)

b. Deserve of protection in his life, wealth, and honor.

The Prophet -peace and blessings of Allah be upon him- said, “I have been ordered (by Allah) to fight against the people till they testify that ‘Laa ilaaha illallah wa anna Muhammad -ar-Rasul Allah (none has the right to be worshipped but Allah and that Muhammad is the messenger of Allah), and perform as salat (iqaamat as salat/prayers), and give zakat, so if they perform all that, then. they save their lives and properties from me except for Islamic laws, and their reckoning (accounts) will be with (done by) Allah.” (Collected by Bukhari)

c. Deserve to obtain his rights from other Muslim

Among the rights of Muslim toward each other is returning Salam (greetings), visiting the sick, and so on, as mentioned in hadith: ” Responsibilities of a muslim to other muslim are 5 things: return greetings, visit the sick, follow the deceased (to his funeral), answer invitation, and pray for the one who sneeze among them.”(Collected by Bukhari, in hadith no. 1260)

Obligation of a Muslim

The first and prime obligation of someone who embrace Islam is to deny all forms worshipped, but Allah, and get away from all forms of shirk. Then, submitting all worships to Allah alone. Allah decreed,

“So whoever disbelieves in taghut, and believes in Allah has grasped the most trustworthy handhold with no break in it.” (Al Baqara/The Cow: 256)

Note:
The meaning of ‘taghut’ on that verse is ‘everything (falsely) worshipped beside Allah.’ (Aisar At Tafasir, Al Baqara: 256)

Between Islam and Iman (Faith)

Islam and iman (faith) have a very strong bond of correlation. In certain hadiths, The Prophet -blessings and peace of Allah be upon him- mentioned Islam and iman in different meanings. As stated in a hadith, that the Prophet -peace and blessings of Allah be upon him- was visited by angel Gabriel, and the angel asked him about Islam. The Prophet -peace and blessings of Allan be upon him- answered, “Islam means to bear witness that none has the right to be worshipped but Allah, and that Muhammad is the messenger of Allah, to establish the Salat, to pay the Zakat, to fast (the month of ) Ramadan, and to perform pilgrimage to the House (Ka’bah) if you have the means.” Angel Gabriel asked again, “What is faith?”. The Prophet -peace and blessings of Allah may be upon him – answered, “It is to believe in Allah, His angels, His Books, His messengers, the Last Day, and to believe in al Qadar (divine will and decree) both the good and bad of it.” (Collected by Muslim, in hadith no. 8). This hadith is also known by “hadith of angel Gabriel”.

But in another hadith, The Prophet -peace and blessings of Allah may be upon him- interpreted iman/faith as Islam, as what revealed in a narration from Ibn Abbas -may Allah be pleased with him-, the Prophet -peace and blessings of Allah may be upon him – asked, “Do you know what is meant by believing in Allah (the Exalted) alone?”. They replied, “Allah and His messenger know better.” Thereupon, the Prophet said, “It means to testify that ‘Laa ilaaha illallah wa anna Muhammad -ar-Rasul Allah (none has the right to be worshipped but Allah and that Muhammad is the messenger of Allah),  Iqaamat as salat (to perform the [compulsory congregational] Salat/prayers), to pay Zakat, to observe Saum (fasts [according to Islamic teachings]) during the month of Ramadan, and to pay Khumus (one fifth of the booty to be given in Allah’s Cause.” (Collected by Bukhari, in hadith no. 53)

To understand the interconnection between faith and Islam, we shall view a principle in the science of Arabic language, that is: kalimatani idza ijtama’a iftaraqa wa idza iftaraqa ijtama’a, which means, “there are 2 paired words, which, if mentioned together in a sentence, each contain s different meaning. And if mentioned (only)one of them, then the meaning of mentioned word contains the separate meanings of both. For example: Iman (faith) and Islam, poor and destitute, and the like.

In the hadith of Gabriel, Islam and Faith were mentioned altogether, thus making them differ in meaning. Islam comprises physical deeds, and faith includes beliefs and spiritual deeds. While in the hadith from Ibn Abbas, the Prophet only mentioned the faith, thus it also comprises the meaning of Islam, and it was interpreted as physical deeds.