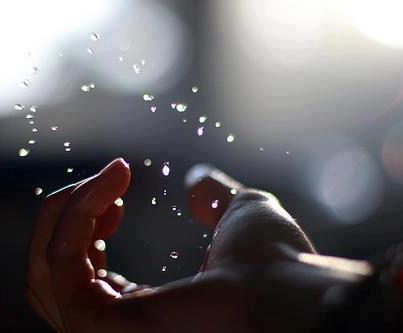 All praises be to Allah, peace and prayer may always bestowed upon Prophet Muhammad, his family, and his devoted companions.

I am sure, that you still have a very fresh memory of how difficult it was to live during the drought. The land was dusty, plants were dried, water sources were shrinking, and the weather was prickly, prickly hot. But now, everything has changed; the land is muddy, greeneries are everywhere, water ditches are easily found, and the temperature is cool or brisk. Do you know what causes those changes? All happened due to the rain, which Allah the Exalted has poured down for the sake of His slaves.

“Allah sends the winds that stir up clouds and then He spreads them in the sky as He pleases and splits them into different fragments, whereafter you see drops of rain pouring down from them. He then causes the rain to fall on whomsoever of His servants He pleases, and lo, they rejoice at it, although before that they were given to despair. See, then, the tokens of Allah’s Mercy: how He revives the earth after it is dead. Verily He is the One Who will revive the dead. He has power over everything.” (QS. Ar Rum/The Romans: 48-52)

Brother, allow me to ask you a question, “Have you ever think about the function of the rain?”

You’d probably swiftly answer, “The rain is there to grow the plants, and fulfill the water needs of living creatures.”

That is true, but to prompt such an answer one doesn’t need a muse or a long, deep thinking process; in fact, all living creatures certainly knows or feels so. But what I inquire is a particular answer which reflects your awareness and sensitivity of what truly happened around you.

Through this article, I’d like to entice you to think well about the whole functions of the rain so that you may act appropriately over it. Hence, you’ll be able to feel the pleasure of every drops of the rain showering your country. And in turn, that rain of you country will always bring blessings to you and your surrounding.

“We also sent down blessed water from the heaven, wherewith We caused gardens and harvest-grain to grow, and tall palm-trees with their thickly-clustered spathes; all this as sustenance for Our servants. And thus We do bring the dead land back to life with water. Such shall be the coming forth (of human beings from the earth).” (QS. Qaaf: 9-11)

The first function: To grow the Plants

No matter how skillful you are in nurturing a plant, it would be impossible to grow it without water, moreover to yield anything. Hence, it is undeniable that after the rain, various plants which withered and hidden inside the earth before, would live and grow profusely in an instant.

“And of His Signs is that you see the earth withered, then We send down water upon it, and lo! it quivers and swells. Surely He Who gives life to the dead earth will also give life to the dead. Surely He has power over everything.” (QS. Fusshilat: 39)

Role of the rain

During the drought, some of the plants were dead, and left behind only small seeds of it which planted deep inside the earth. And many of the big-trunked trees were seemingly dying, thus none of it’s leaves stayed on it’s branches and twigs. When you saw such condition, as occurred in our country not so long ago, you might say that those plants are dead and wouldn’t grow anymore. But now your prediction is going wrong all the way.

“And it is He Who sends forth winds as glad tidings in advance of His mercy, and when they have carried a heavy-laden cloud We drive it to a dead land, then We send down rain from it and therewith bring forth fruits of every kind. In this manner do We raise the dead that you may take heed.” (QS. Al A’araf/The Height: 57)

The second function: Water source for The Living Creatures

All Creatures on this earth, particularly the living ones, will not be able to maintain their lives without water to drink. Hence, such water is the primary need of all creatures. So was their condition, that since the beginning of the creation of the earth, Allah the Exalted has provided them everything, waters and plants. All to preserve the living of men in particular, and all creatures in general.

“and thereafter spread out the earth, and brought out of it its water and its pasture, and firmly fixed in it mountains; all this as provision for you and your cattle.” (QS. An Naziaat: 30-33)

Exalted be He, Who had prepared every single need of His creations even before they asked for it. This, undoubtedly, is a strong evidence of Allah’s generosity which has been forgotten by many of the men.

The third function: Remind you of the Power of Allah The Almighty

When you were still at elementary school, you’d been taught of how the rain was formed. It began from the vaporized sea water, which then condensed into a cloud, and then it was swept by the wind until the water poured back to earth in the form of rain. And probably, this lesson of rain formation made you to conclude that rain is one of the natural processes. Isn’t it?

But now, as an adult, who is probably has finished his study at university level, or became a scientist, and been through the bittersweet of life, do you still accept that conclusion just that? Don’t you ever be curious in your mind, to think again that conclusion of yours?

“(To guide) those who use their reason (to this Truth) there are many Signs in the structure of the heavens and the earth, in the constant alternation of night and day, in the vessels which speed across the sea carrying goods that are of profit to people, in the water which Allah sends down from the sky and thereby quickens the earth after it was dead, and disperse over it all manner of animals, and in the changing courses of the winds and the clouds pressed into service between heaven and earth.” (QS. Al Baqarah/The Cow: 164)

These questions may be useful to assist you in thinking back about the rain theory you’ve got during your elementary school time.

“Why was the sea water vapor under the sun?”

“Why only the water that was vapored, while the salty part stayed?”

“Why, when the water was heated by the sun, it went up as water vapors, but it poured down in the form of water drops?”

“And why was the already frozen water vapors in the cloud, didn’t stream down like a waterfall, but always, since long ago, in the form of drops?”

“Why the rain water didn’t stream down as vapors, just as the way it went up the cloud?”

After thinking about the answer of those questions above, please continue it by musing about the meaning of these verses below:

“Did you cast a good look at the water that you drink? Is it you who brought it down from the clouds or is it We Who brought it down? If We had so pleased, We could have made it bitter. So why would you not give thanks?” (QS. Al Waqi’ah: 68-70)

A lesson that we might learn from several verses of Qur’an about the rain is that those verses were ended with words, “He has power over everything.”, as mentioned the fiftieth verse of chapter the Romans, and 31st verse of chapter Fusshilat above.

Brother, the advancement of science and technology indeed is benefiting human being in many aspects of their life. But in the other hand, unconsciously, it made you easily neglected Allah the Almighty. As the result, many signs of Allah’s power around you became meaningless to you. Due to the revealing of the processes of those signs, such as the sun eclipse, the rain, earthquake, and others, your heart got hardened and untouched at the time you saw it, and nowadays you often name it as natural phenomena or the like.

Needless to say that such attitude reflected how far away you’ve been from the values of faith in Allah the Almighty. As an evidence, when the rain came, you didn’t think of it as the sign of Allah’s power, but merely a part of natural cycle on earth. The rain came because it’s rainy season already, and it would stop at the drought season. This was the end of your faith and respond towards it. I don’t know why you didn’t continue your comment with a question: “Who arrange the seasons, and create and regulate the sun’s revolution?”

Realizing the potential of such laziness in thinking to be occurred, the Messenger of Allah felt the need to warn his companions from it.

Narrated Zaid bin Khalid Al-Juhani : ” Allah’s Messenger led the morning Salât in Al-Hudaibiya and it had rained the previous night. When the Prophet had finished the Salât (prayer) he faced the people and said, “Do you know what your Lord has said?” They replied, “Allah and His Messenger know better.” (The Prophet said), “Allah said, `In this morning some of Ibâdi (My slaves or worshippers) remained as true believers and some became disbelievers; he who said that,

Likewise are the sayings which we usually say every time the rain comes: “This continuous rain is because the rainy season has begun.” But rarely we realized that the rain streamed down purely due to Allah’s order and His grace. We neglected Allah, and we remembered the season, whereas Allah has proved that season indeed changes, therefore the rain comes not in particular times, as happened lately.

Brother, as a faithful men, let us come back to Allah’s path, so that we’ll be able to view and judge every affairs according to the way of thinking of a faithful.