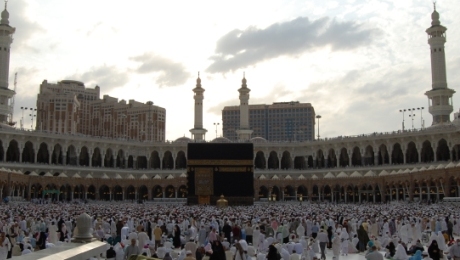 The root of the name of this city, “Mecca” is “imtakka”, means “demanding” or “pushing”. It is called so due to the jamming of men at that place (see: “Mu’jam Al Buldan” for word: Mecca). In Qur’an, Allah named this city with another word, “Bakkah”. Allah decreed, which can be translated as, “Behold, the first House (of Prayer) established for mankind is the one at Bakkah: it is full of blessing and is a centre of guidance for the whole world.” (QS. Ali Imran/The Family of ‘Imran: 96)

Mecca is termed “Bakka”, which originates from the word “bakka-yabukku”, means “pressing”, because Mecca presses the necks of the arrogant people. (See: Tafseer Jalalain for chapter Ali Imran:96)

It also has another names, such as:

Ummul Qura (the center of town). Allah decreed, which can be translated as, “And thus did We reveal this Arabic Qur’an to you that you may warn the people of the Mother of Cities (to wit, Makkah) and those who dwell around it.” (QS. Asy-Syura/The Consultation: 7). Mecca is termed as “Ummul Qura” because it is the most crowded city in activities.

Al Baladul Amin (The safe city). Allah decreed, which can be translated as, “and by this city (of Makkah), a haven of peace.” (QS Tiin/The Fig: 3)

Ma’ad (The place to return). Allah decreed, which can be translated as, “(O Prophet), surely He Who has ordained the Qur’an on you will bring you to the best end. Say to them: “My Lord knows best who has brought true guidance and who is in clear error.” (QS Al-Qashash/The Stories: 85). Some experts said that the meaning of “the best end” is Mecca. (See: Tafseer Jalalain for chapter Al Qashash/The Stories: 85)

Al Bait al Haram. Allah decreed, which can be translated as, “Call to mind when We assigned to Abraham the site of the House (Ka’bah), directing him: “Do not associate aught with Me” and “Keep My House pure for those who walk around it, and for those who stand and who bow down and who prostrate themselves (in worship),” (QS Al Hajj/The Pilgrimage: 26). Some experts in tafseer claimed that the word “the House” here means “Mecca”. (See: Makkah fi Al-Qur’an wa As-Sunnah,page. 6)

Geographically, the city of Mecca located about 600 km at the south of Medina, approximately 200 km at the east of Jedda. The landscape of this city is a narrow valley surrounded by mountains, with Kaaba at the heart of it. There are two mountains that surround this city, mount Abu Qubais and mount Qa’qa’an.

The Virtues of Mecca

There are several hadith that mention the virtues of Mecca, such as:

1. Allah has chosen this city as the place for Kaaba.

Allah decreed, which can be translated as, “Behold, the first House (of Prayer) established for mankind is the one at Bakkah (Mecca)…..” (QS. Ali Imran/The Family of ‘Imran: 96)

2. Mecca is the best city and the most beloved to Allah.

The Prophet -peace and prayer of Allah be upon him- said, while facing Mecca, when he was set to emigrate to Medina, “By Allah, indeed, you are the best city in Allah’s side and the most beloved to Allah. Supposed not because your citizen have expelled me, I would not emigrate.” (Narrated by Ad Daruquthni).

3. Allah protects Mecca from attack from outside of it.

The Prophet -peace and prayer of Allah be upon him- said, “Indeed, Allah has protected Mecca from the elephant’s attack, and He make His messenger and the believers to master it…” (Narrated by Al Bukhari).

The Prophet -peace and prayer of Allah be upon him- said, “…There are no country but Dajjal will enter it, but Mecca and Medina. There are no path to it but there are angels who formed line, guarding the cities…” (Narrated by Al Bukhari).

The Prophet -peace and prayer of Allah be upon him- said, “”…It wild animals should not be hunted, the branches should not be broken, it is unlawful to take lost things in it, unless for those who want to announce it…” (Narrated by Al Bukhari)

There are some laws regarding the city of Mecca:

1. It is permitted to enter Mecca not in ihram state, as long as the person doesn’t intend to perform pilgrimage or minor pilgrimage. The indication is that The Prophet -peace and prayer of Allah be upon him- entered Mecca at the time of Fathu Mecca (the Conquering of Mecca), not in ihram clothes.

2. It is compulsory for those who intend to perform pilgrimage to be in ihram state at the time they enter the boundary of Mecca.

3. It is allowed to spend lots of money in order to visit the Masjid Al Haram. The Prophet -peace and prayer of Allah be upon him said, “It is not allowed to travel to places of worship but to three masjid: Masjid A Haram, Masjid Nabawi (masjid of the prophet), and Masjid Al Aqsa.” (Narrated by Al Bukhari and Abu Dawud).

4. The sin of performing wickedness in it will be double folded compared to sin of wickedness performed outside of Mecca. Allah decreed, which can be translated as, “Whosoever deviates therein from the Right Way and acts with iniquity, We shall cause him to taste a painful chastisement.” (QS. Al-Hajj/The Pilgrimage: 25)

6. It is allowed to perform prayer and circle around Kaaba in Masjid Al Haram at any time, even though it is coincided the forbidden time for prayers. The Prophet -peace and prayer of Allah be upon him-, “Do not prohibit any one to perform circle around Kaaba and prayer in the House of Allah, at any time, day and night.” (Narrated by An Nasa’i, At Tirmidhi, and Ibn Maja).

7. It is not allowed to hunt animals that live in Mecca. Whoever hunt those animals will be fined to recompense it. Allah decreed, which can be translated as, “Believers! Do not kill game while you are in the state of Pilgrim Sanctity. Whoever of you kills it wilfully there shall be a recompense, the like of what he has killed in cattle – as shall be judged by two persons of equity among you – to be brought to the Ka’bah as an offering, or feed the needy as an expiation, or its equivalent in fasting in order that he may taste the grievousness of his deed. Allah has pardoned whatever has passed; but Allah will exact a penalty from him who repeats it. Allah is All-Mighty. He is fully capable of exacting retribution.” (QS Al Maida/The Table Spread: 95)