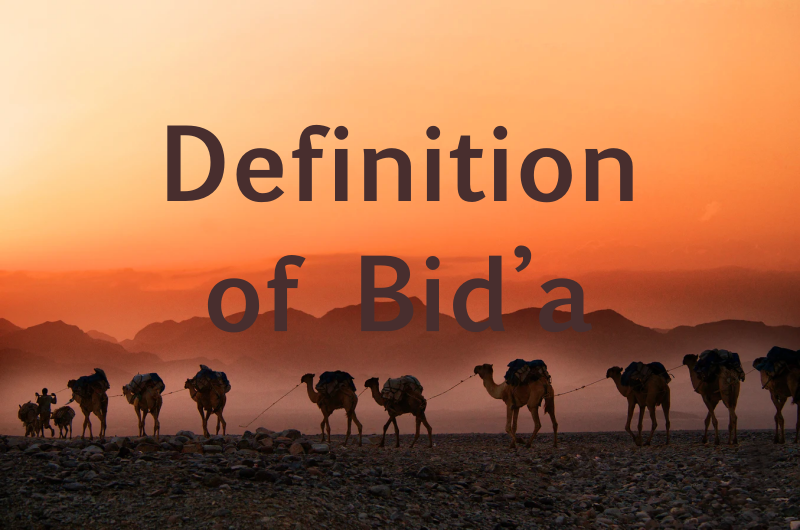 The scholars have given some definitions of bid’a (innovation, heresy). Although these definitions consisted of different spelling, it only adds to its perfection. Despite having a similar meaning. Among the most important definitions are:

Sheikh al Islam Ibn Taimiyya said. “Bid’a in religion is a compulsory as well as voluntary deed which Allah and His messenger never ordered to. Whereas anything that He ordered, be it compulsory or voluntary, those could be recognized from the indications in shari’a, and it is among religious affairs that Allah prescribed in shari’a, even though the scholars are still in disagreement about it, whether it has been done during the time of the Prophet or not. “

He said, “a way in the religion that is created to rival the shari’a, which is intended in order to worship Allah devotedly.”

By looking at these definitions, we could see that there are some fundamental signs for the definition of bid’a in shari’a which could be elaborated in some points below:

1. Bid’a is creating a new affair in religion. As for creating an affair that is not intended to be a part of religion, but merely for the realization of worldly benefit, such as building industry and innovating tools in order to gain worldly benefits for the sake of human being, it is not named as bid’a.

2. Bid’a has no basis in shari’a. As for affair that are shown by principles of shari’a, it is not a bid’a, even though there are no specific indication that support it. For example, what we could witness today, of people making war equipment such as airplane, rocket, tank, etc, from the modern war means that are intended to prepare for a war against the disbelievers and defend the muslims ; those are not considered as bid’a. Although there are no specific indication in shari’a that support it, and the Messenger of Allah didn’t use that weapon during his war against the disbelievers; However, the making of those tools is included in Allah’s decree –Glorified and Exalted be He-, “And prepare for them (the enemies) anything of the power that you can afford.” And so are other deeds. Thus, anything that has basis in shari’a is among the parts of the shari’a itself and not a bid’a.

4. Bid’a in religion sometimes adds and sometimes reduces the shari’a, as Suyuthi said, and it needs a definition regarding whether the motivation behind thar addition is religious-related. If the motivation is not religious-related, then it is not a bid’a. For example, abandoning obligatory affair without legitimate reason is a wrongdoing and not a bid’a; likewise, abandoning a voluntary affair is not called a bid’a. It will be explained later with some of the examples when we reach the discussion of division of bid’a, insha Allah.

These are the most important definitions regarding bid’a that comprise its laws. It has shown the boundaries of bid’a and the correct principles to recognize it. As for the scope of each definition in relation to the laws of bid’a, it is presented differently.

Hence, among those definitions, Ima Syathibi’s definition is the chosen one since it covers a comprehensive boundaries that exclude anything that is not included as bid’a.