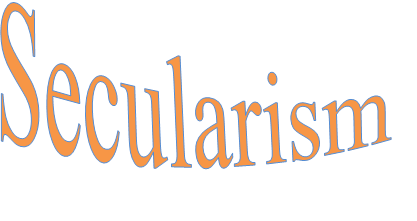 The division of religion into the core, which is especially for certain people, and shari’a which is compulsory for the rest of regular people, and separation of politic or other affairs from religion is indeed an incorrect action. Whatever comes against the shari’a, whether in the form of ‘core of religion’, politic, or else, might be ruled as kufr, or astray, according to it’s level (of deviation, -ed) (See:”Mujmal Ushul Ahlissunah” by Dr. Nashir al-‘Aql).

Divisional terms of religion into the core, the shari’a, and recognition, are innovated terms, made by the Sufis. What they meant with ‘the core’ was certain people who had reached particular level in religion, thus they got obligations of shari’a being dropped from them. Shari’a is a term for regular people who are still obliged to perform obligations mandated in religion. These terms can essentially cancel and abort the teachings of Islam so as to eject the person who created and believed in it from the Islam with that beliefs.

Likewise, included in vanity act is to separate politic affairs from religion. Even, distancing politic from religion will yield a political injustice and oppression towards others.

Critics over secularism (Ideology of separating religion from country affairs)

For information, Islam has covered religion and daulah (state), worship and leadership matters. But Unfortunately there are some people who want to separate religion from the state, and they thought that religion does not intervene in controlling the state. Therefore, in this brief article, we’ll mention several indications showing that this religion has indeed controlled the state affairs too.

A state, or in Arabic language is termed as daulah, is a part of the earth inhabited by a large number of people, governed by power and founded above certain laws.

During the Mecca period, Islam was enduring a dreadful condition; it was impossible for the muslims to perfectly establish the Islamic teachings as a whole. Hence, when the elements of new society had been formed, and they had set themselves free from that shackles of ignorance, Allah endowed them a new place to settle and strengthened them with that city of Medina, and there where Islamic state founded, under the leadership of Prophet Muhammad -peace and prayer of Allah be upon him- , and there where various kinds of shari’a rules were revealed in details, thus, on such condition, what so called Islamic state was completed, since it was consisted of a territory, people, laws, and government. The place of territory was Medina, the people were consisted of muslims and non muslims, the laws were divine decrees, and the government was Prophet Muhammad -peace and prayer of Allah be upon him.

So was because this religion is a complete, perfect religion. Allah had sent it down to be out forward by individual and society, to be their life guide in this world. From here, it is recognized that this religion admits the establishment of a state, a power to govern it, and even such power is compulsory to preserve the religion and worldly affairs altogether. Furthermore, Islamic teachings wouldn’t be able to be established as a whole without a country and sovereignty.

The first indication: Commands in the Qur’an

The second indication: Practices of the Prophet -peace and prayer of Allah be upon him-

The Prophet -peace and prayer of Allah be upon him- as the government chief had issued orders and practiced anything that would become the state duties. He sent delegations, formed troops, accepted emissaries, served as judge, appointed commanders and zakat collectors, sent mails to the states’ leader, and many more.

The third indication: Sunnah of the four caliphs

Among the crucial point to be aware of is that there were so many orders given to the believers, not to Prophet -peace and prayer of Allah be upon him- exclusively. It shows that the state and governmental affairs are not confined to the people of his age only, but also to the rest of the believers, in any time. Hence, when the Messenger of Allah -peace and prayer of Allah be upon him- was dead, the companions chose to take care of his body, and Abu Bakr said, “Can not help for this problem (about continuing his task ) there must be people who enforce them.”

Also the saying chief of the believers Ali Ibn Abi thalib, -may Allah be pleased with him- when he denied the argumentation of Khawarij upon the importance of a government, he said. “Men must be led, whether by the good or the bad”. Then somebody asked him, “O chief of the believers! We’ve known the good ones. But what about the bad?” He replied, “Through him, laws will be enforced, street will become safe, enemies will be fought, and the spoils of war may be shared.”

By this, the state led by the guided caliphs were established after the death of the Messenger of Allah -peace and prayer of Allah be upon him-, laid on Islamic foundation. Imam Al Mawardi said, “Leadership was built to replace prophesy in preserving the religion and control the world.”

Al ghazali said, “Religion is the foundation, and Authority is the guard. If a thing has no foundation, it’ll ruin and it has no guard, it’ll be lost.”

Among the Important Duties of a State

Important duties of a state are maintaining the religion, proliferating enjoin to Islam, justly resolve human problems, get rid of wickedness from among society, preserving noble manners of society, guarding the borders and territories and maintains a respected local religions (such as the Holy Land), enforced the shari’a laws, declaring holy war to defend people who have been wronged and against those who oppose Islam after being enjoined that he converted to Islam or he was under warranty of Islam by paying some tributes, to uphold Allah’s rights (that is the high position of Islam above all religions), collecting zakat and distributing spoils of war (spoils that were taken not through the war), managing the finance of Baitul mal and distributing it to whom deserved of it, appointing the trustworthy to be given tasks or managing wealth, addressing problems directly and not too often relied on the representative for selfish pleasure or worship, paying attention to the needy and poor in all facets of life, such as the freeing of a slave, helping people who owe, representing for marriage for those who have no representation. In fact, there is nothing in the history of state where the state involved in a war just to defend the interest of the poor, just as what Abu Bakr and the other companions had done, when they fought against people who were reluctant to pay their zakat. Abu Bakr Ash Shiddiq said, “By Allah! I will fight against those who are separating between prayer and zakat.”

Such a beautiful rules, at the time of ignorant that spread everywhere on earth, and it was nothing but the guidance and graces from The Lord Who Is The Most Knowing and The Most Thorough, and it was certainly different from other newfound states which rules were just newly found after they fell and being oppressed.

So great were the rules, that it made the Prophet -peace and prayer of Allah be upon him- was able to take care of his people in afflictions, that has never been achieved by any country till now. He said, “ None of the believers but I am greater for him in this world and the Hereafter. Read if you want the verse, “Surely the Prophet has a greater claim over the believers than they have over each other.” (translation of chapter Al Ahzab:6), therefore, whoever believer dies and left any wealth behind, should be inherited by his family whoever they are, and whoever left any debt, or losing something, then come to me, for I am his guardian.” (Narrated by Bukhari)

The Excellences of Islamic state

This state which Allah has obliged to established possesses several excellences, among those are:

– It is the state of creed, whereupon the faith in Allah, His angels, His divine Books, His messengers, the Last Day, and the divine wills stand firmly.

– Allah’s religion (Islam) becomes the way of life of this state. Both the judges and the people are obliged to hold onto it.

– The maker of shari’a is Allah, Lord of the universe, and every other shari’a that goes against it considered as null and void.

– There is no room in Islamic state to create laws, instead there are rooms for individual interpretation (ijtihad) in terms of shari’a by holding fast to indications, foundations, and general principles.

– Political and social rules erected upon the principle of council, brotherhood, and mutual assistance.

– Obeying the government is compulsory in decent affairs, and forbidden on indecent ones.

– The nation (primarily scholar) is demanded to take notice of the government works, advised them in a good way about their oversight (not by demonstration) in order for the government to run well.

– The main duty of a state is to strengthen Allah’s shari’a upon the face of this earth, defend it, enjoin it, and spread it among mankind.

Islamic shari’a includes the creeds, worships, noble manners, criminal laws, etc. Among the shari’a there are matters aimed to do by each individual (such as the creeds, worships, social interaction, mannerism, etc), and there are matters which are the right of the government to enforce, such as law enforcement, distribution of spoils of war, etc. Al Hasan Al Basri said, “They (the government) hold 5 businesses: the friday prayer, the congregational prayer, the eid prayer, guarding the state board, and enforcing criminal law.”

“It is said that Islamic shari’a didn’t come in the form of acts?”

Answer: Islam indeed didn’t mention it’s shari’a in the form of casual acts, but it determined the basic principles, and basic pillars of a government and running a state, hence it stood between the firmness of a principle and the flexibility of it’s ways and forms. This is the gift from Allah and it shows how perfect His guidance is for the muslims, since He has sufficed them and mentioned the unchanged things, such as council, justice, establishing the sources of law, perfect method that should be put before them to be the judge for every problems and the solver for every clashes. Besides, Islam has given them the ways and facilities in practicing it, so that they’ll be able to make individual interpretation and be haste in grasping all the good from any ways and examples, in the framework of principles that has been fixed, since wisdoms (the precise way) are the lost things of a believer, thus wherever he finds it, then he is more deserve of it. This is also showing the flexibility of Islamic shari’a and it’s fit form for every time, place, and nation, all praises be to Allah. It will be different it the rules were made so tight that it become impractical for certain places or nations. And Allah knows best.