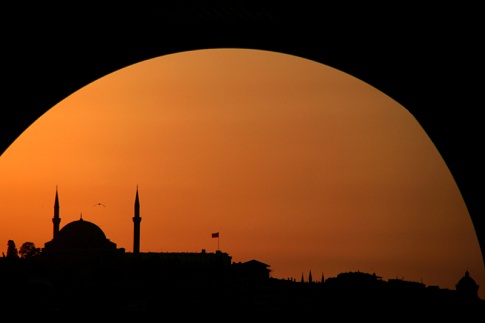 Islam is to surrender to Allah and perform tawheed towards Him, submit to Him by being obedient, and avoid something that is related to shirk and the do-ers. Islam has three levels, which are: islam, faith (iman), and ihsan (perfection). Each level has pillar(s).

There are five pillars: The shahada of “laa ilaaha illallaah-muhammadur rasuulullah”, to perform pray, to pay zakah, to fast Ramadan, and to perform pilgrimage to the House of Al-Haraam (The House of Allah).

The meaning of “laa ilaaha illallaah” is “laa ma’buuda bi haqqin illallaah” (no deity has a right to be worshipped but Allah).

The tafseer of that sentence is explained by the word of Allah, which means, “And (remember) when Ibrahim said to his father and his people, ‘Verily, I am innocent of what you worship, except Him (i.e. I worship none but Allah alone) Who did create me. And verily He will guide me.’ And he made it a Word lasting among his offspring, (True Monotheism), that they may turn back to the word.” (Surah Az-Zukhruf: 26-28)

In addition, the word of Allah, which means, “Say O people of the Scripture (Jews and Christians), ‘Come to a word that is just between us and you, that we worship none but Allah (Alone), and that we associate no partners with Him, and that none of us shall take others as lords besides Allah.’ Then, if they turn away, say, ‘Bear witness that we are Muslims.'” (Surah Al-Imran: 64)

The argument about the shahada “Muhammadur rasuulullah” is the word of Allah, which means, “Verily, there has come unto you a Messenger from amongst yourselves. It grieves him that you should receive any injury or difficulty. He is anxious over you (to be rightly guided, to repent to Allah, and beg Him to pardon and forgive your sins in order that you may enter Paradise and be saved from the punishment of the Hell-fire); for the believers (he is) full of pity, kind, and merciful.” (Surah At-Tawbah: 128)

The meaning of shahada “Muhammadur rasuulullah” is to obey every single thing that he has ordained, to justify all things he preached, and to stay away from all things he forbid, and do not worship to Allah except in a manner that he has set (the shari’a)

The argument about praying, zakah, and tafseer of tawheed is taken from the word of Allah, which means, “And they were commanded not, but that they should worship Allah, and worship none but Him alone (abstaining from ascribing partners to Him), and perform salah, pay zakay, and that is the right religion.” (Surah Al-Bayyinah: 5)

The argument about fasting is from the word of Allah, which means, “O you who believe! Observing the fasting is prescribed for you as it was prescribed for those before you, that you may become Al-Muttaqun.” (Surah Al-Baqarah: 183)

And the supporting argument about performing pilgrimage is in accordance with the word of Allah, which means, “Hajj (pilgrimage to Mecca) to the House (Ka‘bah) is a duty that mankind owes to Allah, those who can afford the expenses (for one’s conveyance, provision and residence). And whoever disbelieves (i.e. Denies Hajj [pilgrimage to Mecca], then he is a disbeliever of Allah), then Allah stands not in need of any of the universe (mankind, jinn and all that exists).” (Surah Al-Imran: 97)

Faith (Iman) has more than 70 branches. The highest branch is the shahada of “laa ilaaha illallaah”, and the lowest branch is to shift any disturbance from the road. And being shame is included as a branch of faith.

There are six pillars of faith, as mentioned in the hadith, of which mentioned, “You have the faith towards Allah, His Angels, His Books, His Messengers, the Resurrection Day, and you have the faith to the destiny, not only good one but also the bad one.”

The argument about the six faith principle is based on the word of Allah, which means, “It is not righteousness that you turn your faces towards east and west (in prayers), but the quality of the one who believes in Allah, the Last Day, the Angels, the Book, the Prophets…” (Surah Al-Baqarah: 177)

The argument about faith towards the destiny is the word of Allah, which means, “Verily, we have created all things with Qadar (Divine Preordainments of all things before their creation as written in the Book of Decrees Al-Lauh Al-Mahfuz).” (Surah Al-Qamar: 49)

Ihsan (perfection) has one pillar and two stages.

As mentioned in one hadith, “Ihsan (perfection) means you worship Allah as if you could see Him. However, if you could not (as if) see Him, verily He sees you.”

The argument about ihsan is included in the word of Allah The Exalted, which means, “Truly, Allah is with those who fear Him (keep their duty unto Him), and those who are good-doers.” (Surah An-Nahl: 128)

Besides, the word of Allah, which means, “And put your trust in the All-Mighty, the Most Merciful, who sees you when you stand up (alone at night for Tahajjud prayers) and your movements among those who fall prostrate (to Allah in the five compulsory congregational prayers). Verily He is the All-Hearer, the All-Knower.” (Surah Ash-Shu’ara: 217-220)

Also the word of Allah, which means, “Neither you do any deed nor recite any portion of the Qur’an, -nor you (mankind) do any deed (good or evil) but We are witness thereof, when you are doing it.” (Surah Yunus: 61)

Then he asked, ‘O Muhammad, tell me what is Islam! The Prophet saallallahu ‘alayhi wa sallam said, ‘Islam means testifying that there is no other deity has the right to be worshipped but Allah and Muhammad is the Messenger of Allah, to perform pray, to pay zakah, to fast Ramadan, and to perform pilgrimage to the House of Allah if you are able to do so.’ The man replied, ‘You are correct.’ Umar then said, ‘We were astonished, he asked and he justified it himself.’

The man asked again, ‘Tell me what is faith!’ The Prophet sallallahu ‘alayhi wa sallam said, ‘Faith means you obey Allah, His Angels, His Books, His Messengers, and the Last Day, as well as have a faith towards good and bad destiny.’ That man replied, ‘You are correct. Tell me what is ihsan (perfection)!’ The Prophet sallallahu ‘alayhi wa sallam said, ‘Ihsan (perfection) means you worship Allah as if you could see Him. Even if you could not, verily Allah can see you.’

The man asked again, ‘Tell me, when will be the day of resurrection?’ the Prophet sallallahu ‘alayhi wa sallam replied, ‘The person who is being asked does not know more than the person who asked.’ The man asked again, ‘Tell me about the signs (of the Last Day)!’ The prophet salllallahu ‘alayhi wa sallam replied, “The women slaves give birth their masters, and you will be able to see people barefooted, clotheless, and the goats’ shepherds are competing to build the high-rise building.’

Then the man went off, while I (Umar) kept silent for several days. Afterwards, the Prophet sallallahu ‘alayhi wa sallam asked, ‘O Umar, do you know the man who asked me yesterday?’ Umar said, ‘Allah and His Messenger know more.’ The Prophet sallallahu ‘alayhi wa sallam said, “Verily he is Jibril and he came to you to teach your religion.” (Narrated by Muslim)

Keyword: Islam, What is Islam