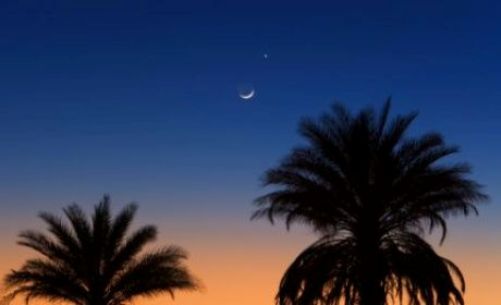 Fasting and Celebrating the Eid with the Government

Sometimes there are differences between the ru’yah (seeing of the new crescent) of Ramadan and Shawwal among the Islamic countries. If the crescent is seen on a country, is it compulsory for all muslims to fast and to celebrate the eid based on the result of that seeing, or should every country has their own decree?

This problem is argued by the scholars.

Some scholars argued that if the crescent of Ramadan has been confirmed through a legal approach as explained in shari’a, then it is compulsory for all muslims around the world to fast based on it, and if the crescent of Shawwal has been established, then all of them should celebrate the eid based on that decree.

And the generality of the hadith,

The supporters of this opinion said, “This verse is directed to all muslims”

The other scholars argued that if the seeing of a country has been confirmed, then the decree should be applied on that country and on countries which have similar position in seeing the crescent. That is because the experts in astronomy had agreed that the crescent rises at different positions. This is the opinion of Sheikh al Islam Ibn Taimiya.

It is a very strong opinion, and also supported by the indications and analogy. As for the indications, it is based on a hadith from Kuraib. He was sent by Ummul Fadhl bint Harits
to Muawiya in Sham, and he returned from Sham to Medina at the end of the month.

Ibn Abbas asked him about the crescent. Kuraib answered, “We had seen it on Friday night.” Ibn Abbas said, “But we had seen it on Saturday night, thus we kept on fasting until it reached thirty days or we had seen the crescent.” Kuraib asked him, “Why don’t you just follow the seeing of Muawiya?”. Ibn Abbas replied, “No, this is how the Messenger of Allah -peace and prayer of Allah be upon him- ordered us to do.” (Narrated by Muslim, in hadith no, 1087)

As for the analogy, it is as comprehended that the muslims have different times in their daily life, consequently, they have different calculation of the months either. This is indeed an evident analogy. And this opinion, as we’ve confirmed earlier, is the stronger  opinion.

The rest of the scholars stated that men should follow their government. If the government has decided on an eid, then they should celebrate the eid on that day, to avoid any feud among them. This opinion is supported by the hadith,

From social perspective, this is a strong opinion, although we prefer to choose the second opinion.

In the end, we should say that this is a matter of difference in interpretation (a difference among the scholars of which each group of them held legal indications as their basis, -ed), therefore the muslims should leave it to their government and follow them in choosing one of the three opinions above, in order to diminish the differences and clashes among the muslims, because as we know that unity is something most emphasized in Shari’a. (Refer to: Majmu’ Fatawa Sheikh Ibn Uthaymeen: 20/43—62; Syarh Mumti`: 6/308–311)

The Council of Grand of Jurist of Saudi Arabia and the Council of Islamic Jurisprudence Board have decided upon this matter, that is to leave the decision regarding the crescent to the government of each country, since it will be more beneficial for the muslims in general. (Refer to:   Taudhih al-Ahkam: 3/454-456  by Abdullah al-Bassam, and Fatwas of Sheikh Abdul Aziz bin Baz: 8/295

(With several grammatical and dictional changes by the editor of  whatisquran.com)