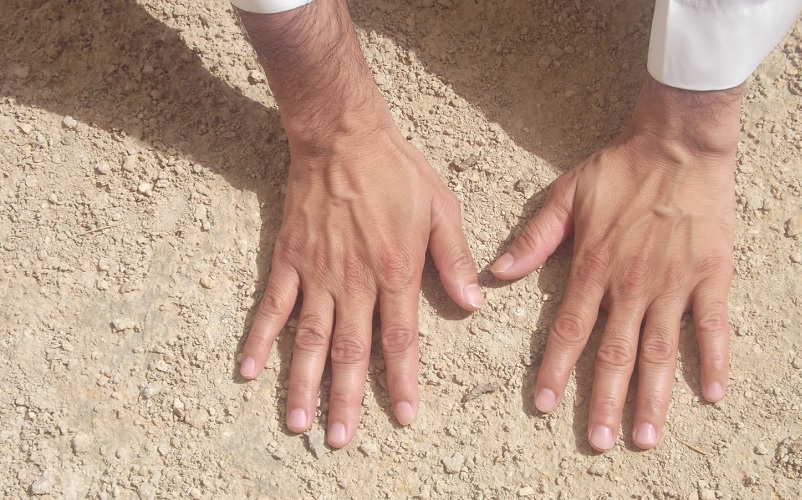 The Earth is as Pure as Water

At a time, The Messenger of Allah -peace and prayer of Allah be upon him- performed salat, then he saw a man who was moving aside and didn’t pray in congregation. And among the method of his enjoin and the perfection of his mannerism, he didn’t scorn or mock a person in haste because of the person’s mistake, until he found out what made him did it. Thus, upon seeing the man, he gently asked, “O so-and-so, what prevent you from praying in congregation?”. He answered, “O Messenger of Allah, I had a wet dream and am not pure yet, and I don’t find water yet.” Hearing his reason, the Prophet said, “Use the earth soil, because indeed, it is enough for you.” (Narrated by Bukhari and Muslim).

Allah the Glorified and Exalted decreed, “And if you are in the state of ritual impurity, purify yourselves (by taking a bath). But if you are either ill, or travelling, or have satisfied a want of nature or have had (intimate) contact with women and find no water, then have recourse to clean earth and wipe your faces and your hands therewith.  Allah does not want to lay any hardship upon you; rather He wants to purify you and complete His favours upon you so that you may give thanks.” (Chapter Al Ma’ida/The Table Spread:6). This noble verse revealed that Allah has explained to us how to perform ablution to purify ourselves from minor and major impurities using water, then He makes that water as something pure and purifying. Thus, it is compulsory for us to ablute using water as long as we’re able to. But when we find ourselves unable to or having difficulty in finding water, or there is water but we are unable to use it due to certain causes, Allah, with His graces and mercies upon us, offers us a solution by laying out the rite of tayammum as the replacement of water, by using clean earth as the purifying tool. Tayammum is an exclusivity among many of exclusivities that Allah bestows upon the muslims; Allah has simplified for us every affairs and shari’a laws, and has created solvencies for every hardship that we encounter. The Messenger of Allah – peace and prayer of Allah be upon him- said, “”I have been given five things which were not given to any one else before me. 1. Allah made me victorious by awe, (by His frightening my enemies) for a distance of one month’s journey. 2. The earth has been made for me (and for my followers) a place for praying and a thing to perform Tayammum, therefore anyone of my followers can pray wherever the time of a prayer is due. 3. The booty has been made Halal (lawful) for me yet it was not lawful for anyone else before me. 4. I have been given the right of intercession (on the Day of Resurrection). 5. Every Prophet used to be sent to his nation only but I have been sent to all mankind.” In another narration it is said, “Then that is his place to pray and his purifying tool.” (Narrated by Bukhari and Muslim).

Etymologically, tayammum means al qashd (intend), whereas in shari’a terminology, tayammum is defined as deliberately using the earth’s surface to purify oneself in order to be able to perform anything that is allowed after doing ablution and taking bath.

The meaning of “ash shoiid” in chapter Al Maida:6

In the dictionary of “Lisaanul Arab”, it is said that “Ash Shoiid” means earth soil. Some said: pure soil. And some said, all of the pure dust.

Ibnul Mundzir said, “All of the scholars we know had agreed that a traveler who is afraid of his own safety from thirst, while he has a little water that is just enough for ablution, shall spare the water for his drink and do tayammum.”

Ibn Qudama said, “A person who is worried about the safety of his mount and worried that his wealth will spent in vain is just as one who finds water but is intercepted by some robbers or beasts hence he is worried over his mount’s safety or his wealth. If he is thirsty, and fear that he’ll perish, he must drink the water and do tayammum.”

Majority of the scholars, namely Abu Hanifa, Malik, Asy Syafi’i in one of his opinions, and Ibn Hazm reckoned that it is not required for the sick one to fear of his death to justify him to do tayammum. In fact, if performing ablution worsen his illness or delays his recovery, he is allowed to do tayammum; based on the generality of the verse in chapter Al Maida, and on the generality of Allah’s decree, -Glorified and Exalted be He-, which can be translated as, “Allah wants ease and not hardship for you.” (Chapter Al Baqara/The Cow:185)

The Correct Method of Tayammum

” (Muttafaq alaihi,Abu Daud and An-Nasa-i). As for the stance of some scholars who said that tayammum is done with twice patting, one for face and another for hand until elbow, it is a weak opinion, based on several evidences below:

The scholars’ opinions are divided into two:

First opinion: he should discontinue his prayer and perform ablution, and repeat his prayer all over again.

This is the opinion of Abu Hanifa and Ahmad, and also voiced by Ats Tsauri and Ibn Hazm. Their reasons were:

Second: he should continue his prayer, there’s no need to discontinue it,

This is the opinion of Malik and Asy Syafi’i and the second opinion narrated from Ahmad. It is said that he had canceled his first opinion. This is also the opinion voiced by Abu Tsaur, Daud, and Ibn al Mundzir. Their reasons were:

As for the strongest between the two opinions according to majority of the scholars (and the one that is closest to the truth) is that he should continue his prayer after he commenced it. It is as a person who performs expiation fast, if he already commenced his fast, then he finds a female slave, he doesn’t need to cancel his fast. And Allah knows best.

Whoever performs prayer with tayammum, then some water is found, during the time frame of that prayer, is not obliged to repeat his prayer, according to the most valid between two opinions among the scholars, as voiced by Malik, Ats Tsaur, Al Auza’i, Al Muzani, Ath Thahawi, Ahmad -in one of his opinions-, and Ibn Hazm. Whereas Abu Hanifa and Asy Syafi’i stated that he should repeat his prayer if he is able to use the water. And Allah knows best.

It is Allowed to do Tayammum by using Wall

From Ibn Abbas, he said, “I and Abdullah Ibn Yasar, ex-slave of Maimuna, wife of the Prophet -peace and prayer of Allah be upon him- visited Abu Juhaim Ibn a Harits Ibn ash Shimmah al Anshori. Then Abu Juhaim said, “The Prophet -peace and prayer of Allah be upon him- came from the direction of Bir Jamal. A man met him and greeted him. But he did not return back the greeting till he went to a (mud) wall and smeared his hands and his face with its dust (performed Tayammum) and then returned back the greeting. ” (Muttafaq alaihi,also narrated by Abu Daud and An-Nasa-i). This hadith contains a lesson that it is allowed to perform tayammum with wall that has dusts on it if a hand is clenched on it, since tayammum could be done on the earth’s surface, whether it is in the form of ground, dust, or else (without any dust at all).

The Nobility of Islam

This is several brief explanations regarding the function and the use of earth soil (ground) in our life. If we look closer to this noble religion’s rite, we’ll find that Islam emphasizes on cleanliness. Indeed, Allah has ennobled Islam and its followers by making purification as the key to the most prominent of worship; the prayer. Thus, a muslim’s prayer will not be accepted until his body, clothes, and place of worship is clean. At the time when there’s no water for purification, Allah has created tayammum as the replacement of ablution and bath, thus we’ll find no weakness nor drawback in this religion. Therefore, it is appropriate for us to praise Allah Who has perfected this religion, and thus, we shall not tarnish its perfect state by creating or inventing innovations, by adding or reducing anything from the noble teaching of this straight religion.